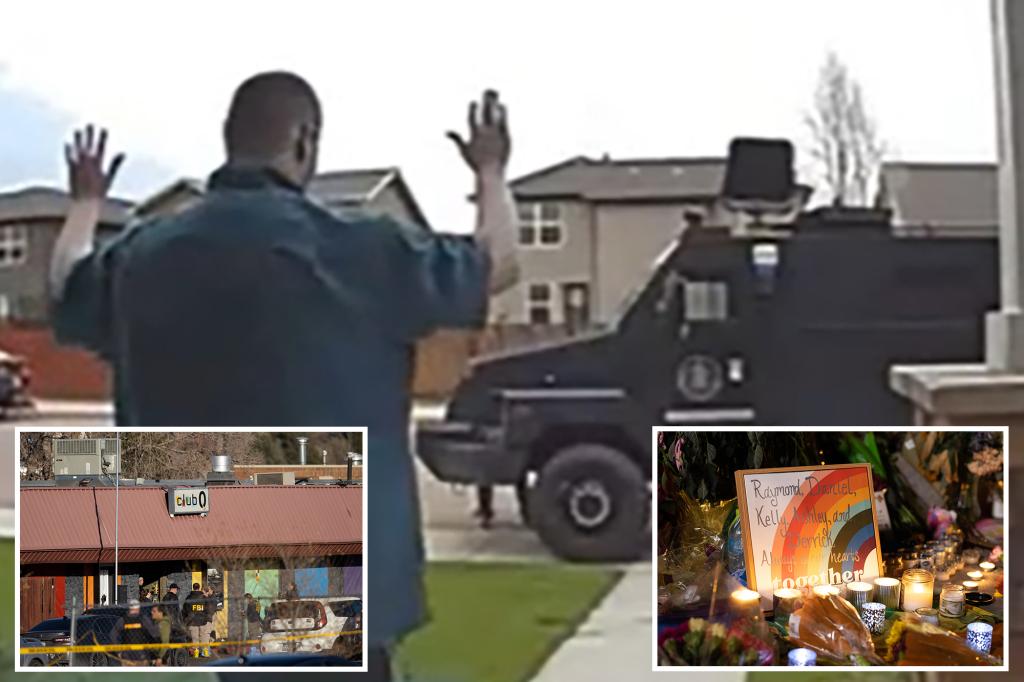 Accused Colorado mass shooter Anderson Lee Aldrich had a troubled life growing up in California and Texas — one largely hidden by a complete name change before his 16th birthday.

Until he was 15, Anderson, now 22, was known by his birth name, Nicholas F. Brink, according to records obtained by The Washington Post.

He remains a registered member of the Church of Jesus Christ of Latter-day Saints, which until 2019 described people in same-sex marriages as “apostates,” someone who’s abandoned religion.

His parents, Aaron Brink and Laura Voepel, separated in July 2001 when he was still a baby, and he moved around between Orange, California, and San Antonio, Texas, before settling in Colorado, the records show.

His mom — the daughter of Republican Randy Voepel, who compared the Jan. 6 Capitol attack to the Revolutionary War — also had several brushes with the law, including an arrest for arson in Texas in 2012, when her son was 12, the outlet noted. She also appears to have three outstanding warrants from earlier in California, according to The Gazette.

A YouTube channel under his original name, Nick Brink, was started in 2010, when he would have been 10, The Washington Post said.

It has 416 subscribers despite appearing to have only posted one video two years later — a profanity-laden, offensive cartoon titled: “Asian homosexual gets molested by floating piece of f—le.” It mainly features characters dropping f-bombs.

When he was 15, Brink became a target of what the DC outlet described as “a particularly vicious bout of online bullying.”

A Wikipedia-like website was created with his name, photos and online aliases, along with a fictitious biography riddled with insults and ridicule, the paper said, without identifying the site.

It was not clear why he was targeted — but he soon legally changed his name to the one he was arrested under for shooting dead five people and injuring 18 others in Club Q in Colorado Springs late Saturday.

He petitioned a Texas court using two of his grandparents’ names — not his mother’s — to legally change his name to Aldrich, without stating why, the report said. It was unclear why he chose that name.

His grandparents also appear to have been central to his disturbing arrest in June last year when he live-streamed a four-hour standoff with police after being accused of threatening to blow up his neighborhood.

Relatives told The Gazette that Aldrich flipped after finding out that his grandparents planned to leave Colorado and settle in Florida.

A livestream of the standoff — in which he threatened to “blow it to holy hell” — he also said, “This is the day I die. They don’t give a f–k about me anymore. Clearly,” the local outlet noted.

He was charged with kidnapping and felony menacing, but was never prosecuted. The records in the case have also been sealed.

The arrest also does not appear to have triggered the state’s red flag laws, with Aldrich allegedly using an AR-15-style rifle in Saturday’s carnage, with other weapons and ammo on him.

Officials have repeatedly declined to say how — or when — Aldrich obtained his arsenal, and the affidavits in his case have all been sealed.

However, El Paso County appears hostile to using the law, and in 2019 passed a resolution that says the red flag law “infringes upon the inalienable rights of law-abiding citizens” by ordering police to “forcibly enter premises and seize a citizen’s property with no evidence of a crime.”

Mayor John Suthers said Monday that “we don’t know” whether the gun law would have applied in the case and possibly prevented the attack.

“Hopefully there will be a time when there can be a specific discussion about any prior interaction with law enforcement” and the decision on red flag laws, he told The Washington Post.

Colorado state Rep. Tom Sullivan, whose son was killed in the Aurora theater shooting and sponsored the state’s red flag law, said that Anderson’s 2021 case “should have alerted them, put him on their radar.”

“We need heroes beforehand — parents, co-workers, friends who are seeing someone go down this path,” Sullivan said of the need to flag troubled gun owners.

Duke University sociologist Jeffrey Swanson, an expert in red flag laws, said the Colorado Springs case could be yet another missed warning sign.

“This seems like a no brainer, if the mom knew he had guns,” Swanson said. “If you removed firearms from the situation, you could have had a different ending to the story.”

Aldrich remained in a local hospital having been attacked by two hero club-goers who fought back and bashed him with his own weapon. Authorities have not discussed his condition.

While confirming that the suspected mass shooter is a member, the Church of Jesus Christ of Latter-day Saints condemned the shooting.

“The senseless act of violence in Colorado Springs is of great sadness and concern to us,” the church told The Washington Post.

“We are greatly troubled by any violence in our communities and condemn most especially violent acts that are the result of intolerance against any of God’s children.”

Chechen leader to send teen sons to fight in Ukraine