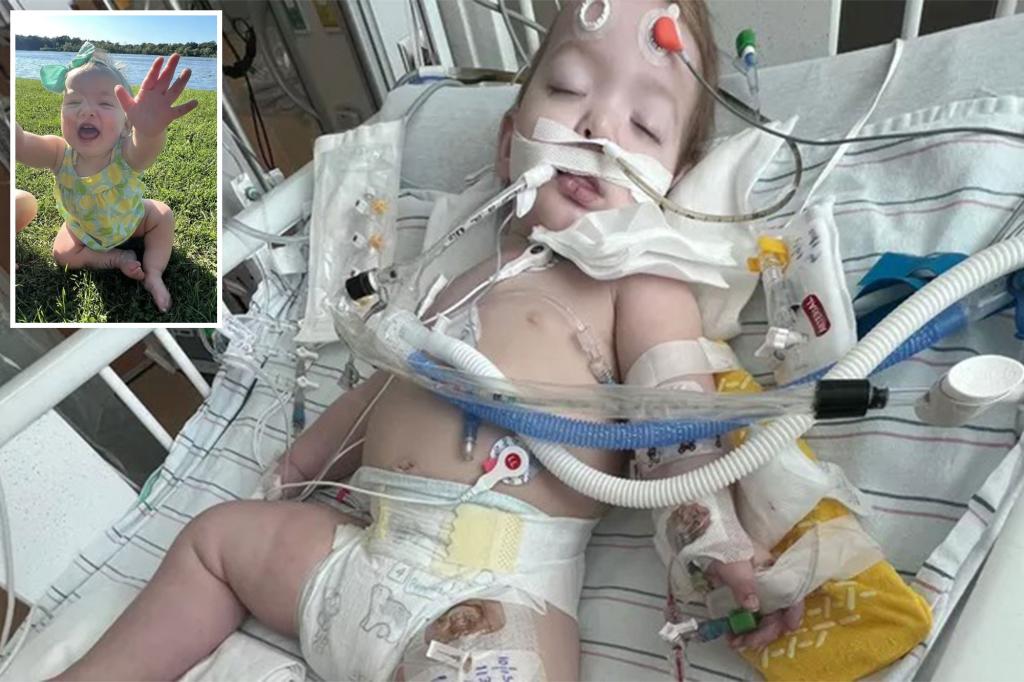 A mother of five is asking parents to keep their sick children at home after a recent respiratory syncytial virus (RSV) outbreak infected three of her daughters and led to a frightening hospitalization for one of them.

Carmen Bremiller, 27, of Barker, New York — in Broome County — has been caring for her daughters for several weeks and said the road to full recovery is ongoing.

Bremiller told Fox News Digital that all five of her children — Sophia, 10, Ashlynn, 6, Caroline, 4, Ava, 3, and Kinsley, 1 — caught the common cold in early September after they returned to in-person schooling for the first time since the COVID-19 pandemic began.

She said she kept her children home for one week until they seemed to recover, but by early October, they exhibited cold-like symptoms once more.

This included fevers, eye mucus and loss of appetite, according to Bremiller.

“I called their doctor’s office and talked to the nurse, wanting them to be seen, but was told they just had a cold and to treat it as such. So, that’s what I did,” Bremiller recalled.

Three of her daughters, who were all under the age of five, had high fevers and Bremiller reportedly gave them over-the-counter pain relievers to try to ease their discomfort.

Bremiller said she contacted her children’s doctor’s office again about her concerns because she felt the kids were sick for an abnormally long period, but she was repeatedly told their symptoms were likely connected to the earlier cold they had.

Then, around Oct. 6, Bremiller said the local Head Start program where two of her daughters were enrolled reportedly informed her that there were confirmed cases of flu, pink eye, croup and RSV.

Bremiller said three of her daughters were then diagnosed with RSV after she took them to an urgent care for evaluation.

“My two middle children became pretty sick but got over it on their own and are doing much better,” Bremiller said. “Unfortunately, my youngest daughter didn’t do so well with it.”

Kinsley, who’s now a year old, experienced occasional fast breathing, but she didn’t appear to be in respiratory distress, according to Bremiller.

Then she stopped drinking fluids completely.

When medical staff examined Kinsley on Oct. 12, her oxygen levels were found to be low, and they remained that way even when she was given an oxygen mask.

Bremiller said Kinsley was transferred to a children’s hospital in Buffalo via ambulance and that emergency room staff determined her child had pneumonia from a chest X-ray, while blood work confirmed RSV was still present.

Kinsley’s left lung had water in it, so she was moved to the ICU and put on an external ventilator, Bremiller recalled.

Her condition worsened and she had to be intubated and sedated.

“It was extremely hard seeing her like that,” Bremiller told Fox News Digital. “With a tube down her throat, completely unconscious, and all kinds of lines and IVs. I tried not to cry.”

She continued, “I felt responsible. How could I not know how sick she was? Why didn’t I take her in sooner? How could something like this happen so fast?”

Kinsley’s vital signs took a hit when a mucus plug got stuck in her airway on Oct. 18, Bremiller said.

“She had low heart rate, low blood pressure and her oxygen level went down to 60%,” Bremiller recalled. “They gave her albuterol and that opened up her airways, got the mucus plug out and got her oxygen up. They gave her some medicine to also help with her blood pressure. After that, she seemed stable but had a high heart rate.”

As days went on, Kinsley was sedated once more and was placed in a prone position (belly down), so that secretions could exit her impacted lung. Kinsley reportedly showed improvement but was placed back on a ventilator.

Kinsley underwent a computed tomography (CT) scan to check her lungs and a pulmonologist conducted a bronchoscopy — a procedure that allows doctors to examine lungs and air passages — on Oct. 24, according to Bremiller.

Medications and breathing tests were given to Kinsley. Slowly, she began to recover.

“On Oct. 29, my baby was officially off the ventilator,” Bremiller said, later adding that Kinsley also came off the feeding tube, IVs, arterial lines and sedation medication.

“I cried as I was finally able to hold her again after two-and-a-half weeks, which felt like years.”

Kinsley was hospitalized for 24 days. She returned home on Nov. 4.

“Kinsley’s official diagnosis was RSV, pneumonia, acute respiratory distress syndrome (ARDS) and now asthma,” she continued. “She’s on an inhaler four times a day. After about three months they will reevaluate.”

Bremiller said the child is still recovering and is being closely watched.

The 1-year-old is currently on “a lot of different medications” and she has follow-up appointments with doctors and specialists; these include a pulmonology reevaluation and a sleep study to determine if Kinsley has sleep apnea, Bremiller said.

“Kinsley has a long road ahead of her until she’s back to 100%,” Bremiller said.

Recently, Bremiller’s four other children have developed coughs; and while she tried her best to keep Kinsley away from that exposure, including removing her children from the Head Start program, Kinsley has been experiencing a mucus-filled cough and noisy breathing.

Kinsley’s nurses have been checking on her daily and Bremiller said she’s been treating her with a nasal suction device, nasal spray, humidifier and an albuterol inhaler.

Kinsley’s oxygen is around 95%. The child is now eating and drinking well, Bremiller said.

“As of Nov. 13, the nurse said her lungs sound clear, but thinks she could have croup now. They will still be coming out periodically to check in on her,” Bremiller added.

While Bremiller said she thinks Kinsley is “a little fighter,” she can’t but feel “extremely nervous with her being sick again so soon.”

She told Fox News Digital that she wants parents to know that they shouldn’t send their kids to school or day care if they’re sick.

“You may be frustrated and not able to find someone to watch them so you can work, but figure it out,” Bremiller said.

“You may even blame the school for getting your child sick in the first place. And that may be true, but it doesn’t make it right or OK to knowingly send your child to school with a virus that’s contagious and harmful to other children.”

Bremiller also said, “My baby didn’t go to day care or school; her older sisters got sick from school and brought it home. Just know not everyone is your child and not everyone has the immune system your child has. Your child might be fine, but that doesn’t mean someone else’s will be. So, please think twice before sending your sick kids to school.”

“Just remember next time, my baby could be your baby.”

Bremiller added that she thinks parents should take their sick children to a doctor immediately, even for lesser symptoms.

“Even when we were at the hospital, I was in complete denial [as to] how sick she actually was. My only regret is not getting her there sooner.” Bremiller continued.

Bremiller said her family has launched a GoFundMe to help with finances after experiencing the loss of two incomes since Kinsley’s extended hospitalization.

“I’ve never been the type to ask for handouts. My husband and I were both out of work while she was in the hospital, and we already live paycheck to paycheck with having five kids,” Bremiller said.

“We weren’t expecting any of this to happen.”

Bremiller said that she and her husband may be out of work for longer as they take Kinsley to more medical appointments. In addition, they’ve applied and were approved for family medical leave.

“But we have not received it yet,” Bremiller added, “and it’s only a portion of what his [her husband’s] income usually is.”

Bremiller noted that she knows that other American families are struggling in the current economy, so prayers and well wishes for Kinsley are welcome.

She also wants people to know that some children’s hospitals offer snacks and drinks in family waiting rooms on a donation basis, so it could be helpful to donate shelf-stable meals and toiletries to local hospitals if guidelines allow it.

Fox News Digital reached out to the John R. Oishei Children’s Hospital – the hospital that reportedly treated Kinsley – for comment.

RSV: What families need to know

The American Academy of Pediatrics (AAP) and Children’s Hospital Association (CHA) sent a letter to President Joe Biden and Health and Human Services Secretary Xavier Becerra to declare a national emergency response to recent RSV and influenza outbreaks, according to a joint press release issued on Nov. 14.

About 58,000 children under age five are hospitalized for RSV each year; the respiratory illness causes 100-500 deaths annually, according to data from the CDC.

The AAP and CHA said their request for an emergency declaration and federal support is being made because RSV has catastrophic potential that requires immediate action in light of COVID-19.

“Symptoms typically develop within two to five days of exposure and last for one to two weeks,” Goudy, who has not treated Kinsley, continued.

“While the early phase is usually mild, little ones will often experience more acute symptoms as the illness progresses. Some complications of RSV require hospitalization for respiratory distress or dehydration.”

Goudy said common signs of RSV infection include congestion or a runny nose.

“Watch for signs of respiratory distress such as rapid breathing, labored breathing, color changes of the lip (pale or blue), nasal flaring, wheezing, changes in alertness or changes in body position to breathe,” Goudy warned.

“Notify your provider if you are ever concerned. Suction the nose of babies and toddlers who are unable to blow their nose.”

If a child has been infected with RSV, Goudy said it’s important to monitor their breathing and hydration status (including wet diapers and tears), and to keep infected children away from other children, as “RSV and the flu are spread through respiratory droplets and close person-to-person contact,” he added.

Goudy advised parents and caregivers that it’s important to set boundaries with anyone who comes in close contact with babies and young kids — “such as washing their hands beforehand, avoiding kissing the baby, and wearing a mask,” he said.

“A person is typically contagious for a few days prior to showing symptoms, [but you should] be sure to keep your child home from school or day care until they’re fever free for 24 hours and until your child does not need additional help with suctioning,” Goudy continued.

“There is not currently a vaccine for RSV.”

RSV, flu and other respiratory illnesses are spreading

Deeter, who has not treated Kinsley, told Fox News Digital that RSV infections and influenza cases are building up in southern states.

Other “common respiratory viruses” that typically occur during winter are “players” as well, including rhinovirus, adenovirus and human metapneumovirus, according to Deeter.

“Normally these viruses cause mild infections, but we are concerned that symptoms could be worse this year as everyone’s immune systems have not seen these viruses much in the last couple of years,” Deeter said.

“In addition, Europe is already seeing an uptick in new COVID variants that we are going to have to follow carefully, as they might also affect our children more severely this time around,” she added.

“This vaccine has been proven safe and effective in decreasing the severity of COVID infection, and both the influenza and COVID vaccines have only very minimal side effects reported,” Deeter said.

“Our children have already lost too much time in school throughout the last two to three years,” she continued.

“It’s incredibly important for their psychosocial and intellectual development to be able to attend school regularly and interact with their peers and teachers.”