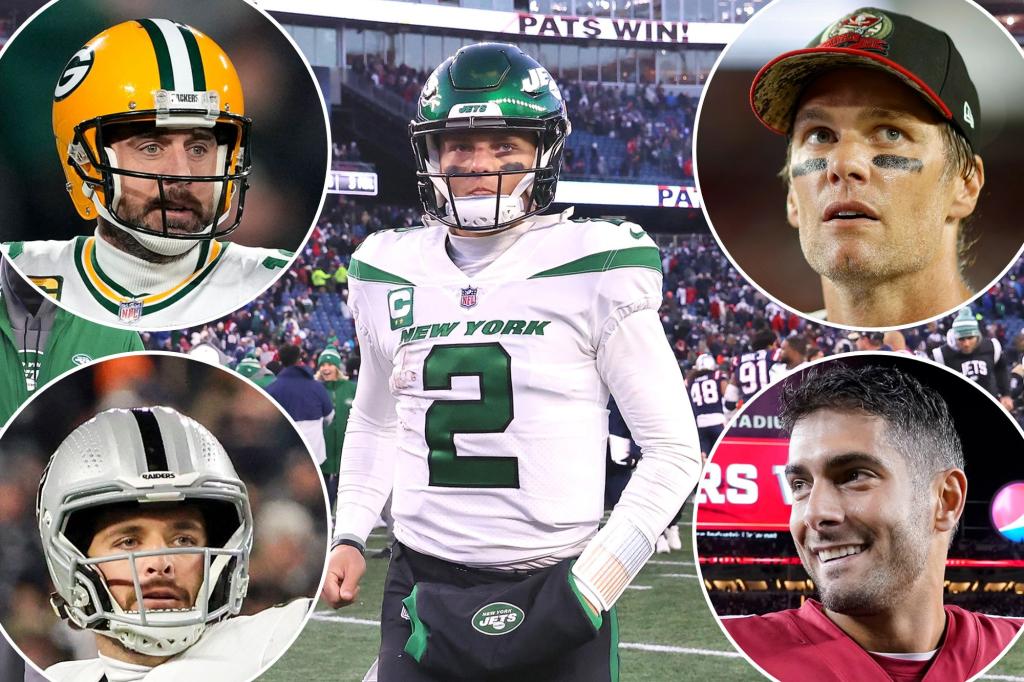 Aaron Rodgers? Tom Brady? Jimmy G? How Zach Wilson has opened the door for a Jets splash at QB

If Brett Favre could leave a legendary legacy with the Packers and jump to the Jets in a late-career gamble, why can’t Aaron Rodgers do the same?

If the rest of the Jets’ season resembles the first 10 games, these are the types of scenarios that will be in play.

Maybe Saleh sticks with Wilson, who taps into the potential that made him the No. 2 overall pick in the 2021 draft and begins winning games for the Jets — or at least not losing them, as he and the offense did against the Patriots on Sunday. Maybe he takes small steps in the last seven games of the season that lead the team to believe he can make the leap next season. Or maybe Wilson is pulled as starting quarterback and White adds a second chapter to his cult legend, his accurate if not powerful arm working within the offense.

When the Broncos were strong enough to carry Tim Tebow into the divisional round of the playoffs following the 2011 season, they quickly ditched Tebow for Peyton Manning, who eventually game-managed Denver to a Super Bowl. When the Jets beefed up entering the 2008 season, notably bringing in offensive linemen Alan Faneca and Damien Woody and linebacker Calvin Pace, they no longer could hope Chad Pennington or Kellen Clemens could be their franchise quarterback. So they went out and traded for Favre, the Packers’ former franchise quarterback. The Rams forgot about developing Jared Goff and added veteran Matthew Stafford; the Titans gave up on Marcus Mariota because Ryan Tannehill could help immediately.

These are the choices a team makes when its overall talent arrives before its quarterback. The Jets’ previous two drafts have infused ability on the cheap. Sauce Gardner, Garrett Wilson and Elijah Moore are 22-year-old difference-makers — and older than Breece Hall (21). Quinnen Williams (24) still has a year remaining on his rookie contract, though the Jets might sign the monster defensive tackle to an extension. When these building blocks are in place, there is no longer time to wait for a young quarterback to rise.

Is this fair to Zach Wilson, who is 23 and has played 20 career NFL games? It does not matter. There are teams that would gamble on his talent, but those teams don’t have the talent that surrounds him on the Jets.

If the young and loaded Jets continue to have a quarterback problem for the rest of the season, it would be time to find their Favre. Let’s go through a few of the options, who sound more ridiculous in theory than they are in reality:

Rodgers: The Packers moved on from Favre when the franchise icon was 38, had recently un-retired and had played 17 NFL seasons. Rodgers is 38 and has been unable to rescue a poor Packers team in his 15th season. There are questions about whether Rodgers will want to keep playing. Will the Packers end this era and look to see what they have in young Jordan Love rather than continue to invest time and money in Rodgers, who is in the first season of a three-year, roughly $150 million extension?

Tom Brady: Crazier things have happened, right? The 45-year-old will be a free agent after the season. He loves winning, and he would love beating Bill Belichick. The Jets, forever a hated rival of Brady’s, could offer him the opportunity for both. Brady, leading the NFL in completions (282) and attempts (427) on a mediocre, 5-5 Bucs team, would be tabloid and sports-radio gold.

Jimmy Garoppolo: Brady’s former protégé will never be a star. The 49ers, who committed to Trey Lance before the young QB was lost for the year, know they cannot ask Jimmy G to win games by himself. But the free agent to-be has proven he can be essentially an average quarterback who can guide a powerful team (with a Saleh-led defense) to the Super Bowl, which is precisely what the Jets would be asking.

Derek Carr: The Raiders are 3-7 and heading toward a top draft pick with which they could target a quarterback to rebuild around. In nine seasons, Carr has alternately appeared to be an average quarterback or a borderline top-10 QB — each of which the Jets would take. Carr is owed $32.9 million for 2023 unless the Raiders cut him shortly after the Super Bowl. It would be surprising if Carr returns to Las Vegas.

The more optimistic Jets fans can talk themselves into Lamar Jackson, though it seems implausible the Ravens will let him get away as a free agent. The more pessimistic can survey the likes of Gardner Minshew, Taylor Heinicke and maybe even the resurgent Geno Smith.

Maybe Wilson is about to grow up, and these options become laughable in a week. But everything we have seen thus far indicates the Jets need a proven grown-up at quarterback.

The U.S. men’s national team came away with a point in its first World Cup game since 2014, but it feels as if Team USA squandered two points. A strong first half in which the Americans grabbed a lead gave way to a wayward second half in which the edge was lost in a 1-1 draw with Wales in both teams’ opener in Qatar.

For 81 minutes, it seemed as if this would be a dream start not just for Team USA but for Team Tri-State. Tim Weah — born in Brooklyn, raised in Queens — slipped past the Welsh defense on a breakaway and latched onto a beautiful feed from Christian Pulisic. Wales goalie Wayne Hennessey rushed out to cut off the angle, but Weah knocked it past him for the 36th-minute goal during a first half with plenty of chances for the Americans.

The tide began turning in the second half, but goalkeeper Matt Turner — from Park Ridge, N.J., and a Fairfield grad — potentially saved the game in the 64th minute. Wales’ threat culminated with a running header from Ben Davies. Turner, reacting quickly, leapt and got just enough of the ball with his right hand to tip it over the crossbar.

Turner could not keep the Americans in front for long, though. The equalizer came in the 82nd minute, after Walker Zimmerman took down Gareth Bale in the box. Bale took the spot kick and simply overpowered Turner, who guessed right, but still could not deflect the shot.

For Team USA (ranked 16th in by FIFA’s world rankings), a draw with Wales (ranked 19th) is acceptable. The result is fine, even if the manner in which it was achieved is hard to swallow.

Next up for the U.S. will be England on Friday. The Americans have a point, and hope the two they lack will not burn them.

Is three the magic number for Kyrie?

There are all sorts of questions surrounding Kyrie Irving, who this weekend answered plenty of queries about his sharing a link on social media to a movie that trumpeted anti-Semitic lies, including questioning the Holocaust.

And then there are the basketball questions, which Irving seemed eager to answer. The next one might be: Is this your last chance here?

For a third time in as many seasons, the Nets welcomed Irving back after a prolonged absence for curious reasons. There were those seven games missed in January 2021, when he cited personal reasons in staying away from the team. He did not appear in a game last season until January and did not play at Barclays Center until late March because of his refusal to be vaccinated against COVID-19. This time, he was suspended eight games after sharing the movie and initially refusing to state he held no anti-Semitic beliefs.

Nets fans cheered him in his return Sunday, a solid win over the Grizzlies. The guess here is there will not be a fourth return from Irving after a lengthy absence.

Every Nets game will matter ahead of the Feb. 9 trade deadline. An 8-9 Nets team will have to convince its front office and ownership it can seriously compete for a title, which it has not through a middling start to the season.

Ben Simmons stepping up recently has been encouraging. Irving being back on the floor will help. Kevin Durant has been Kevin Durant.

The alleged super-team is finally here, in action again tonight in Philadelphia. How much longer will it be here?

Instagram should have rejected police pressure to ban rap song, says Oversight Board

Brian Windhorst reveals where his relationship with LeBron James stands