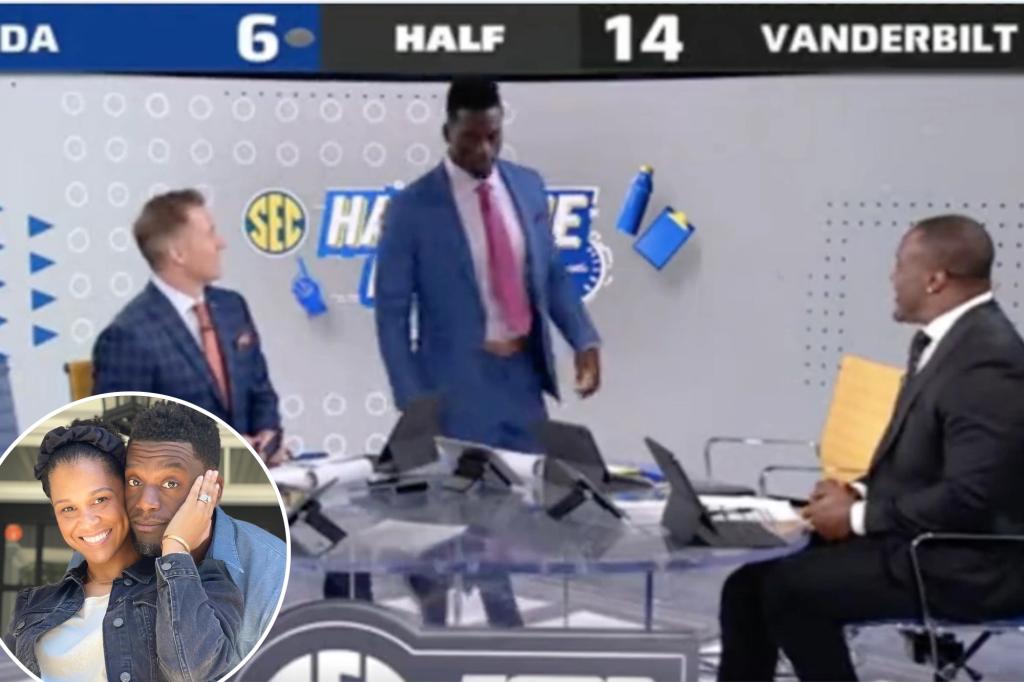 Well, this is awkward.

Tensions appeared to escalate on the set of SEC’s halftime show Saturday during the Florida-Vanderbilt game, after analyst Peter Burns cracked a joke about the wife of co-analyst and former NFL tight end, Ben Watson.

Things began to turn south when Burns jokingly asked Watson if he didn’t get “the memo” about the hosts, including Chris Doering and Takeo Spikes, wearing dark-colored suits.

Watson, who was dressed in a light blue suit with a pink tie, went along with the banter, saying, “As long as I get a text from my wife [Kirsten Watson] that says I look good. Send me the text, baby. Send me the text.”

Burns then chimed in, saying, “That’s not the text she sent me.”

That’s when the broadcast cut to highlights of Vanderbilt’s eventual 31-24 win over Florida. When the show returned from a commercial break, however, Doering and Spikes were the only ones sitting at the desk, while Burns and Watson’s chairs remained vacant.

“Just you and I here, Takeo, not sure what happened to Peter Burns,” Doering said as Watson made his way back to the desk.

“Did you have him keep your wife’s name out of his mouth?” Doering asked Watson, who replied with, “Huh?” as he sat down and slammed his phone on the desk.

“We’ll see how Peter Burns is with that smart mouth in the second half,” Doering joked.

Later in the day, Burns tweeted a selfie with Watson, along with the hashtag “friendship.” The image itself featured Burns sporting a smile while Watson appeared stoic on the SEC Network set.

Burns posted a public apology to Watson and his wife Monday on Twitter, sharing his message alongside a tweet from a user, who considered Burns’ original comments to be “a joke,” adding, “it wasn’t that bad at all.”

“While it was a joke, the truth is that I crossed the line, you should never joke about family so that I owe a public apology to Ben & Kirsten 100%,” Burns wrote. “@BenjaminSWatson couldn’t have handled it better with his humor and class. We all good & proud to call him a friend & coworker.”

Watson then reposted Burns’ tweet, writing, “Apology accepted. We are moving on. See you Saturday man. We have some big games to discuss!”

Although things seemed to be resolved between the co-hosts, Watson appeared to throw shade at Burns after the fact, when actress Holly Robinson Peete criticized Burns’ apology.

“Maybe with your apology don’t quote tweet someone gassing you that it wasn’t ‘that bad’ or offensive to ‘them’?” Peete wrote in a reply tweet to Burn’s apology. “If it was offensive to the person that you ‘joked about’ just apologize straight up to them w/o that opinion … But at least you finally acknowledged it.”

That’s when Watson replied to Peete, seemingly agreeing with her comments.

Shaq breaks his chair while explaining why people ‘ghost’ their partners

Aaron Judge on what is ailing the Yankees’ offense