Home > Sport > Giants vs. Cowboys: Preview, predictions, what to watch for 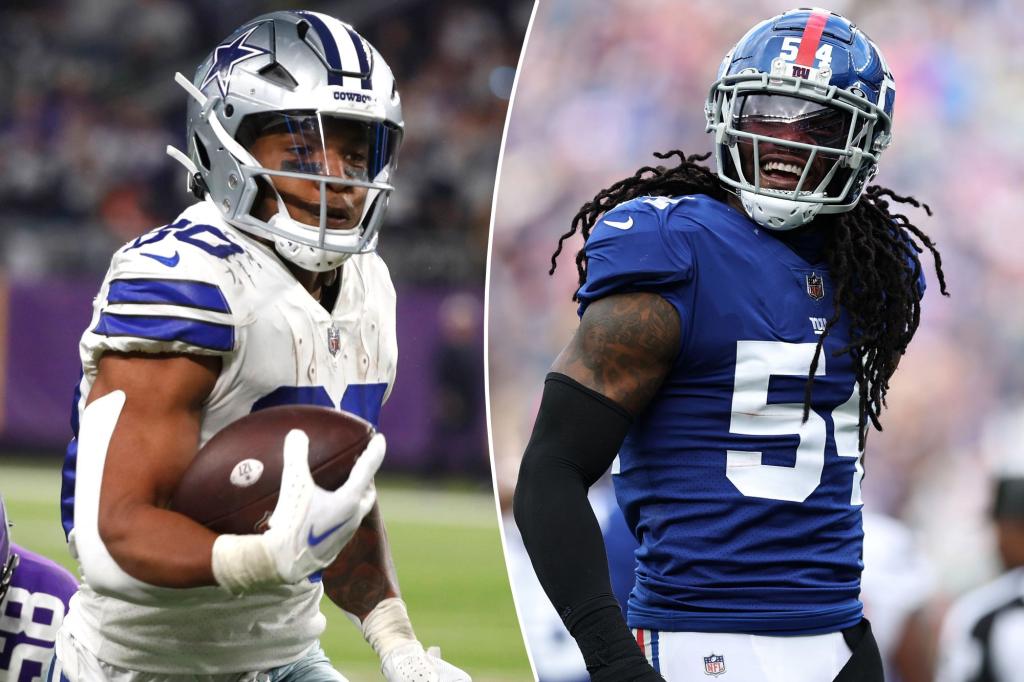 Giants vs. Cowboys: Preview, predictions, what to watch for

An inside look at Thursday’s Giants-Cowboys matchup in Dallas.

Move over, Ezekiel Elliott. The top back in Dallas is Pollard, who is establishing himself as a force in his fourth NFL season. Pollard had two touchdown receptions last week against the Vikings and is averaging a robust 5.9 yards per rushing attempt.

He ripped through the Giants (13-105) in Week 3 when Tae Crowder and Austin Calitro were the starting inside linebackers.

Perhaps Smith and McFadden can do a better job, although the run defense allowed 160 yards on the ground and four rushing TDs last week to a trio of Lions running backs.

The Giants need the Cowboys to be feeling overconfident and satisfied after trouncing the Vikings by 37 points. Otherwise, this is going to be exceedingly difficult. These Thanksgiving games in the Dallas area always have a circus-like feel to them — the Jonas Brothers are performing at halftime — and the home team will be in party mode. How can the Giants ruin the mood?

Passed over: Trading out of the No. 11-overall selection in the 2021 NFL Draft might go down as one of the worst moves in Giants franchise history. Once the Eagles traded up to No. 10 to take receiver DeVonta Smith — the player the Giants’ coveted — the Giants decided to make a deal with the Bears, who took quarterback Justin Fields at No. 11. The Giants passed up taking linebacker Micah Parsons and offensive tackle Rayshawn Slater and moved down to No. 20 and took Kadarius Toney.

Sure, the Giants gained additional picks the next year and used two of them on Evan Neal and Daniel Bellinger. Passing up on Parsons, though, is a killer. He is a beast and the Giants have to deal with him twice a season.

Guarded pessimism: Did the Giants give too much too soon to Shane Lemieux? He underwent surgeries on his knee and toe and had not played since the 2021 season opener, and as soon as he was activated he was inserted at left guard against the Lions.

Lemieux did not exactly look ready for full-time work and now he’s out again with another toe injury. Rookie Josh Ezeudu — the player moved aside for Lemieux — is also out, with a neck issue. The Cowboys have a rugged defensive front. Will backup Jack Anderson (eight snaps this season) have to make his first start? It is either Anderson, Tyre Phillips moving from tackle or Devery Hamilton, signed from the practice squad. Gulp. Jon Feliciano (neck) did not make the trip, meaning Nick Gates will move in as the center, making his first start at center since Week 1 last season.

The prize: The Giants and Cowboys are both going to meet with Odell Beckham Jr. in the coming days.

The Cowboys could use another wide receiver option after CeeDee Lamb and Michael Gallup. The Giants need upgrades everywhere at that position. Will what happens in this game have any bearing on where Beckham lands? The Cowboys have outwardly been far more aggressive in their interest. The Giants are low-keying this and first need to find out if Beckham is healthy, coming off a second ACL surgery. There is no doubt he will be watching this game.

Numbers man: In some ways it seems as if Daniel Jones just got here, but the way the NFL is nowadays — a passing league, for the most part — Jones is quickly rising up the franchise quarterback charts.

He is the seventh Giants player to surpass 10,000 passing yards, and if he gets 105 passing yards in this game he moves past icon Y.A. Tittle and into sixth place. With 21 more completions, Jones moves past Fran Tarkenton and into fifth place on the Giants’ career list. Jones is only halfway through his fourth season. The debate rages on whether or not he is the long-term answer.

A big game on national television on a national holiday wouldn’t hurt the Jones Should Stay advocates.

Giants vs. Bears: Preview, predictions, what to watch for

Astros are lucky … to be this good