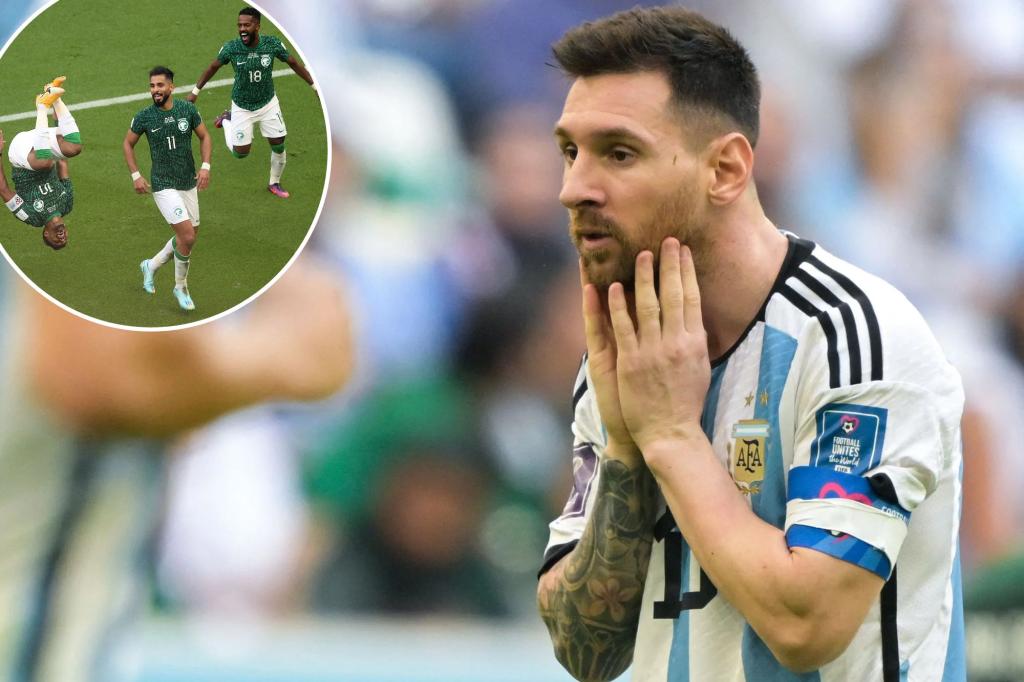 In what will likely be his last World Cup, Lionel Messi entered Lusail Iconic Stadium looking to kickstart his quest for what’s most-eluded his famed career with a gimme.

As he walked off the pitch after the final whistle, however, he had helped deliver one his country’s greatest-ever embarrassments.

Coming into the tournament as one of the favorites and on a 36-match unbeaten run (one-shy of Italy’s all-time record), Argentina crumbled in the second half as they stunningly fell 2-1 to Saudi Arabia – who was the second-biggest underdog in the tournament – in their Group C opener. Messi actually put Argentina up 1-0 in just the 10th minute, cooly converting a penalty as it appeared the Albiceleste would cruise to an easy three points.

It all went wrong in the second half, however.

Less than three minutes after the break, Messi lost possession as he received a pass in the middle of the field. Saleh Al Shehri then latched onto a through ball and beat Argentina goalie Emiliano Martinez to tie the game 1-1. Just five minutes later, Salem Al-Dawsari’s curler gave Saudi Arabia a 2-1 lead as their rapid blitz left Argentina in disbelief.

With Argentina still up 1-0 in the first half, Messi appeared to score on a breakaway, but was called offsides (confirmed by VAR) on a razor-thin margin. Messi began to celebrate before he saw the sideline referee lift the offsides flag, and it highlighted three potential goals Argentina had ruled offsides throughout the match, although none appeared controversial.

“This group always stood out for its evenness, its strength, and it is time to be more united than ever,” Messi told reporters after the game. “We have to go back to our training base and try to win the next game.”

Playing in his fifth edition of the tournament, a World Cup title is the only thing missing from the 35-year-old Messi’s career. Despite winning every possible individual and team trophy between his club sides Barcelona and Paris Saint-Germain, Messi has infamously failed to replicate the heights the legendary Diego Maradona captured in Argentinian lore.

Maradona captained Argentina to the 1986 World Cup title, winning the Golden Ball as the best player of the tournament. He scored two of the sport’s most-famous goals in the semifinal against England – the first an unpenalized hand ball known as the “Hand of God” as one of the worst no-calls ever, and the second an end-to-end individual run, dribbling past five defenders in what was voted “Goal of the Century.”

Messi, on the other hand, has never lifted the World Cup trophy, notably coming as close as runner-up after a heartbreaking loss in extra time to Germany in the 2014 final.

His Argentinian career has largely been marred by disappointment and criticism. In 2017, Messi briefly announced his retirement from the national team, uttering “I tried my hardest, the team has ended for me, a decision made,” after Argentina’s loss to Chile in the Copa America final that year. It marked Messi’s third straight loss in a major international tournament with Argentina, and fourth overall, and he had agonizingly missed a penalty as the game went to shoot-out. He fell under wide-scale ridicule in the country as it was the second straight time they lost to bitter rivals Chile in a Copa America final.

After a country-wide campaign for him to return ahead of the 2018 World Cup, however, Messi soon announced he’d come back. He again came up short, but in 2021 he led Argentina to the Copa America title, his first-ever major international trophy.

But the World Cup is the ultimate prize still eluding him, and his final opportunity at it has now started in disaster. They next play Mexico on Saturday as their ability to get out of the group is suddenly under threat.

What Arte Moreno selling the Angels could mean for Shohei Ohtani

Yankees fans may be growing impatient with the Roger Maris chase, but Aaron Judge isn’t