Home > Sport > NFL Power Rankings for Week 12: ‘Andy Reid Bowl’ could be in the works 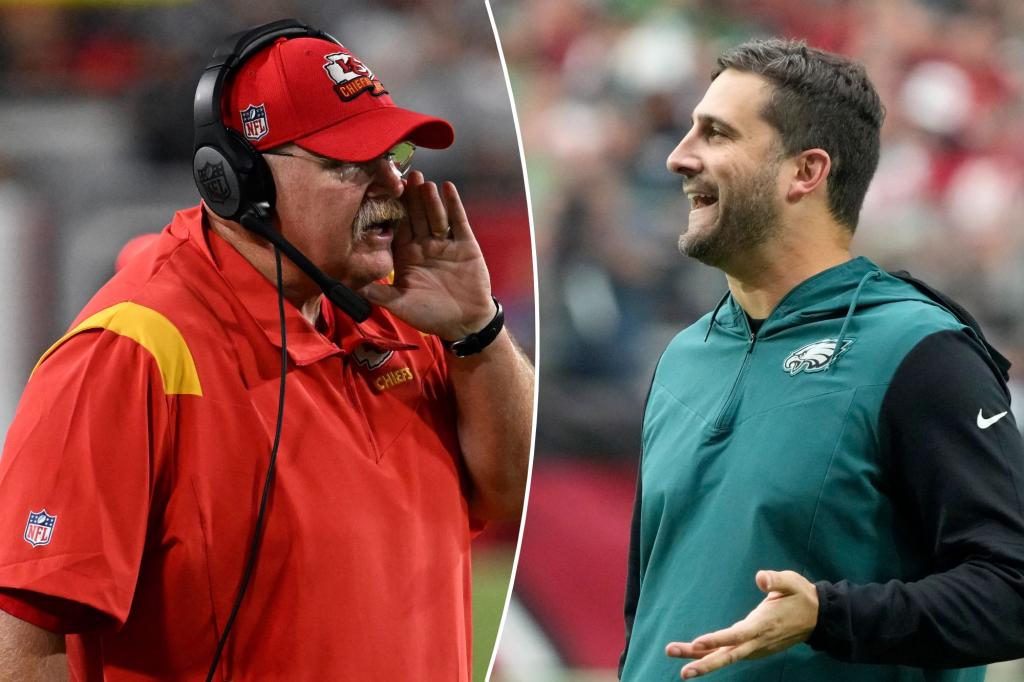 NFL Power Rankings for Week 12: ‘Andy Reid Bowl’ could be in the works

Almost a decade later, the NFL could be headed toward a “Reid Bowl” in Super Bowl LVII. The Chiefs and Eagles are two of the three teams with two or fewer losses and currently hold the No. 1 playoff seed in their respective conferences.

Reid notched 140 wins (regular season plus playoffs) in Philadelphia (1999-2012) and already has 120 with the Chiefs (2013-present). He won his lone championship with the 2019 Chiefs, two years after the Eagles were crowned for the first time.

Nick Sirianni is the Eagles’ third head coach since Reid’s tenure there ended. Chip Kelly went to the playoffs once, Doug Pederson won the ring and now Sirianni is in charge of a team that just added veterans Linval Joseph and Ndamukong Suh to load up for its playoff run.

Who are the other Super Bowl contenders beyond the top two? Here are The Post’s power rankings for Week 12:

In Year 1 after trading Tyreek Hill, there is no doubt who Patrick Mahomes is throwing to in the clutch — and still Travis Kelce can’t be stopped. Kelce caught three touchdowns, including the game-winner with 31 seconds remaining, and set a record for tight ends with 34 career 100-yard receiving games in a 30-27 victory against the Chargers.

After managing just three points over three quarters, the Eagles scored two fourth-quarter touchdowns, including Jalen Hurts’ late 8-yard touchdown run to steal a 17-16 victory over the Colts and rebound from their only loss of the season. Sirianni previously was Colts offensive coordinator under the recently fired Frank Reich — a decision about which Sirianni bit his tongue.

Six feet of snow moved the Bills-Browns game from Buffalo to Detroit, where 56,000 tickets reportedly were sold in 48 hours. Locals helped clear the roads for the Bills to get to the airport and then were treated to watching their team score on all five of its second-half possessions in a 31-23 victory. Tyler Bass was 6-for-6 on field goals.

The Dolphins haven’t lost a game that Tua Tagovailoa has finished and rank No. 2 in passing yards (293.8 per game), No. 3 in total yards (391.5) and sixth in points (25.2 per game). The duo of Raheem Mostert and Jeff Wilson — former 49ers teammates reunited with head coach Mike McDaniel — has added a rushing physicality to the speed-based offense.

Put this on the short list of best wins of the NFL season for the convincing nature: A 40-3 pounding of the Vikings, who had won seven straight games. Tony Pollard had a career-high 189 yards from scrimmage and two touchdowns, and Brett Maher made four field goals (including a 60-yarder) as the Cowboys posted their largest margin of victory since 2011.

Coming off an eye-opening upset of the Bills, what the heck happened? The defense allowed points on the Cowboys’ first seven possessions. The offense allowed seven sacks. The Vikings had been the kings of comebacks and winning close games, but now they have been outscored, 231-229, on the season. Kirk Cousins was just 12 of 23 for 105 yards with a lost fumble.

The best cure for sleepwalking is generating takeaways, which the Ravens have done in 12 straight games. After snoozing through three quarters in a touchdown-less tie game, the Ravens forced three turnovers in the final 8:14 and Lamar Jackson finally found the end zone in a 13-3 win against the Panthers. Head coach John Harbaugh improved to 12-3 after a bye.

Wins at Lambeau Field still are impressive for any visiting team — especially on a Thursday night — even with the Packers in free fall. Ryan Tannehill threw for 333 yards and two touchdowns in a 27-17 victory. Derrick Henry rushed for a touchdown (five straight seasons with at least 10 on the ground) and surprisingly threw for another.

Everything that could go wrong, did go wrong. The Giants were due for a stinker after overachieving in the first half of the season. Saquon Barkley was bottled up (15 carries for 22 yards). Daniel Jones threw two interceptions after 153 straight attempts without one. And Adoree’ Jackson and Wan’Dale Robinson (season over) suffered major injuries.

Jimmy Garoppolo drove up his free-agent price (Jets?) a bit by throwing a season-high four touchdown passes — two each to George Kittle and Brandon Aiyuk — in a 38-10 rout of the Cardinals for a third straight win. It’s scary to think how explosive the 49ers are even without getting big games from Christian McCaffrey or Deebo Samuel.

Add another unthinkable loss to Jets’ lore. Instead of punting out of bounds to help set up overtime, the Jets allowed an 84-yard tiebreaking return for a touchdown in a 10-3 loss to the Patriots. A win would’ve meant first place in the AFC East on tiebreakers. The loss — the 14th straight in the rivalry — instead dropped the Jets to last place.

Kyrie Irving has Coach K ‘in his corner’