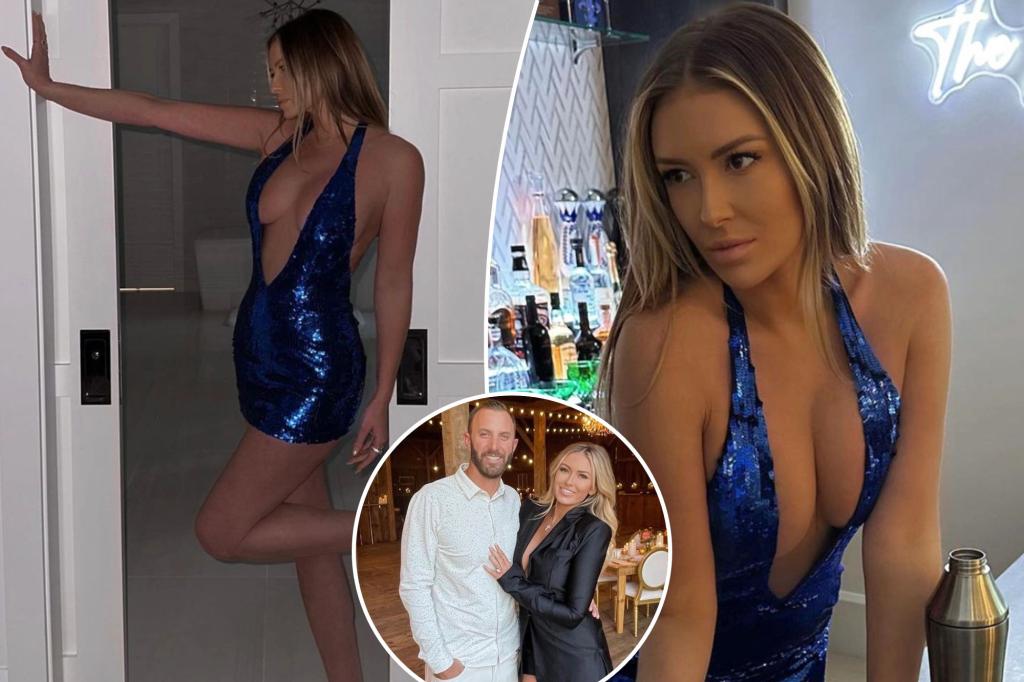 Paulina Gretzky is giving fans an intimate look at her life “after hours.”

In new photos shared Monday on Instagram, the wife of golfer Dustin Johnson can be seen striking a pose behind the bar in a plunging mini dress adorned with blue sequins and sparkly silver sandals.

Captioning the post, “after hours,” the 33-year-old Gretzky holds a glass while looking away from the camera in one of the sultry snaps, and stands next to a glowing neon sign that reads, “The Johnsons,” in another.

Gretzky, the daughter of hockey legend Wayne Gretzky, has long shared snippets of her life with her one million Instagram followers, including a recent NHL date night with Johnson, 38. Earlier this month, she also posted a collection of photos from the couple’s wedding this past spring.

Engaged since 2013, Gretzky and Johnson made their union official in April, when they tied the knot at the luxurious Blackberry Farm in Tennessee. Joined by friends and family — including their young sons, Tatum, 7, and 5-year-old River — the newlyweds were also serenaded by Kid Rock, who performed a cover of Chris Stapleton’s “Joy of My Life” at the reception.

Weeks after Gretzky and Johnson swapped vows, the former Masters champion resigned from the PGA Tour in favor of its Saudi-backed rival, LIV Golf.

Johnson, who was reportedly paid around $125 million to make the jump to LIV Golf, recently wrapped his first season on the controversial new tour, where he earned $35 million in winnings.

Johnson served as the captain of the 4 Aces GC squad, which claimed the first-ever team championship title last month at the LIV Golf Invitational in Miami. He and his teammates, Pat Perez, Talor Gooch, and Patrick Reed, netted the top $16 million prize, or $4 million a piece.

“It has been amazing,” Johnson said after the victory, according to CBS Sports. “Obviously, the fans are what makes it. This week has been incredible. The whole season has just gotten better and better and then obviously this finale has been unbelievable.”

Johnson then celebrated on the green with a kiss from Gretzky.

There’s a huge amount of new (and expensive) tech behind Avatar: The Way of Water

Giants vs. Cowboys: Preview, predictions, what to watch for