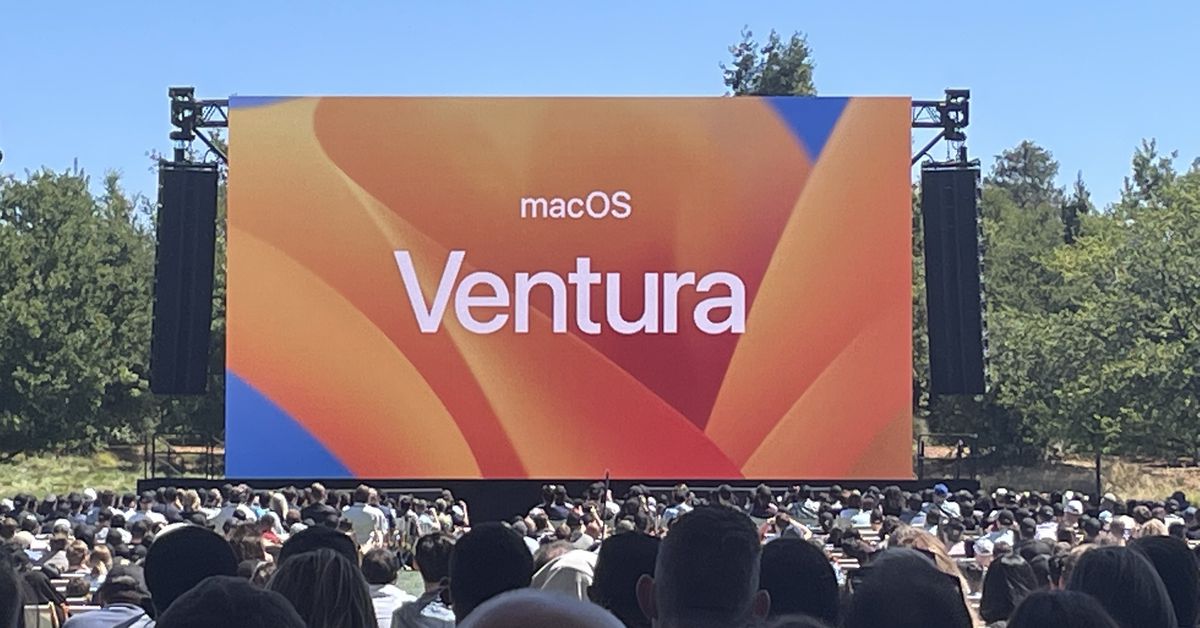 Apple revealed a new version of macOS at its Worldwide Developers Conference. The new operating system, macOS Ventura, includes a new Stage Manager tool, updates to Spotlight, Mail, and Safari, and other continuity features that bring the operating system closer to iOS.

Enabled from the Control Center, the utility will automatically organize your open windows on the left side of your screen while centering the one you’re working in. Users can also group windows together to easily open more than one at a time.

Spotlight comes with new updates as well: it can now find images in your photo library and can search for them by location, people, scenes, objects, or included text (via the Live Text feature). You’ll also be able to take actions from Spotlight (starting a timer, running a Shortcut). Spotlight has also been added to the bottom of the iOS homescreen.

Search in the Mail app has received tweaks, including more complete previews, instant suggestions, and typo corrections. You can also now schedule and unsend emails within the app, set reminders to return to messages in the future, and receive follow-up suggestions, and Mail also “intelligently detects if items such as an attachment or cc’d recipient is missing from their message.”

Safari has a new Tab Groups feature, which allows users to see what tabs their friends are viewing in real time — you can collaborate on bookmark lists and start conversations or calls right from the browser. It also supports biometric “Passkeys” as replacements for traditional passwords across multiple supported platforms. (Apple, Google, and Microsoft all committed earlier this month to support passwordless sign-in across all of their mobile, desktop, and browser platforms.)

Messages now includes the ability to edit and unsend messages, mark them as unread, and recover them if accidentally deleted. There are other features in the new app that make it easier to collaborate on files within group chats and to join SharePlay sessions.

The operating system also brings users the ability to “hand off” FaceTime calls between iPhones and Macs and allows users to effectively use the iPhone’s (likely much better) camera as a webcam in place of the one on their Apple computer. Macs automatically recognize and use the iPhone camera when it’s nearby, with no need for the user to connect the two manually. Continuity Camera includes support for Apple’s Center Stage and Portrait Mode, as well as a new Studio Light feature that can illuminate a subject’s face and dim their background. The camera can also tap an iPhone’s ultra wide camera for Desk View, which shows a user’s face and a view of their desk simultaneously.

iCloud users can now create and share a photo library among up to six family members, which can be organized based on a selected date or photo subjects. macOS will provide “intelligent suggestions” for photos to share, and shared users can add, delete, edit, and favorite the included items.

Apple also announced Metal 3, which will “unleash the full potential of Apple Silicon for years to come,” per the keynote. It includes features like MetalFX Upscaling, which “enables developers to quickly render complex scenes by using less compute-intensive frames,” and Fast Resource Loading API, which provides a “more direct path from storage to the GPU” for shorter wait times. New titles coming to Mac include Resident Evil Village and GRID Legends, while No Man’s Sky is coming to both Mac and iPad later this year.

Other new features include new recognition capabilities for Visual Look Up, Weather, and Clock apps for Mac, accessibility tools including Live Captions for all audio content and Type to Speak on calls, a redesigned System Preferences app (known now as System Settings), and new security tools, including Rapid Security Response.

Apple has long had the goal of bringing macOS closer to its mobile counterparts, a process which this update continues. The past few macOS releases have ported iOS’s staple features (including Focus and Shortcuts), as well as design elements of its icons, windows, and menus over to the Mac. This overhaul will, presumably, continue to universalize the Apple enthusiast’s experience across devices, especially in tandem with new continuity-focused features like Universal Control.

Overwatch 2: all the news about the sequel to Blizzard’s hit hero shooter