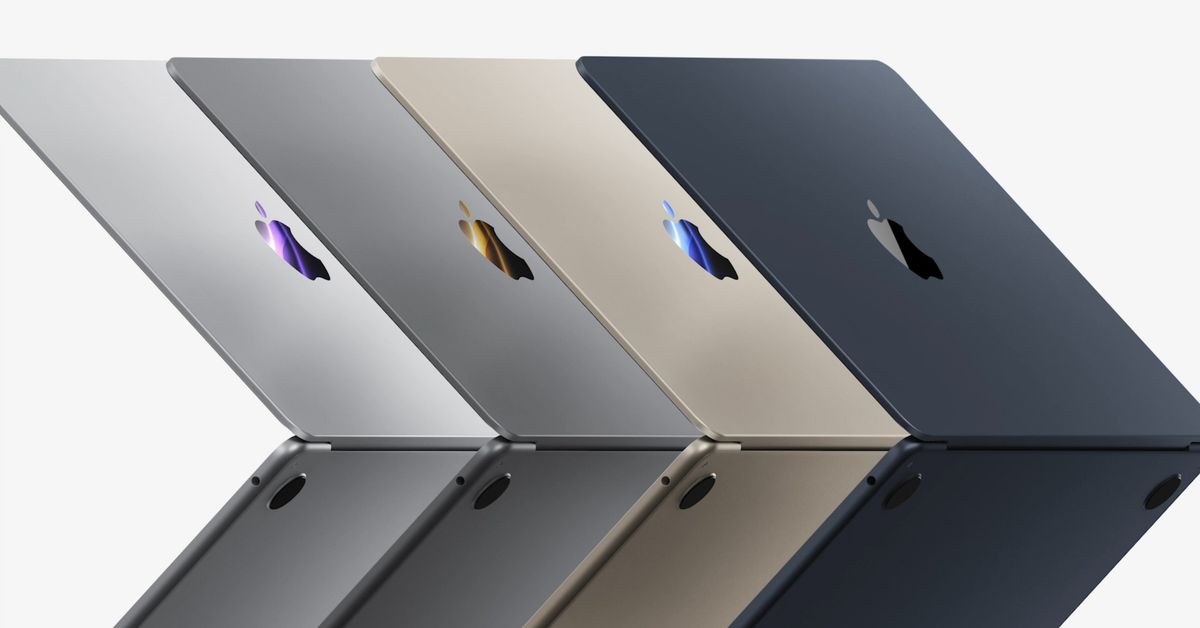 Apple’s WWDC isn’t an event that traditionally packs in several hardware announcements, but nevertheless, a new MacBook Air took the stage during the keynote. The new 2022 model has been designed around the more powerful M2 processor, and its design comes closer to that of the 14-inch MacBook Pro, with a more squared-off look than the traditional wedge shape. It features MagSafe charging, two Thunderbolt USB 4 ports, and a headphone jack. It’s 11mm thick and comes in at 2.7 pounds. It will be available in silver, space grey, and new “starlight” gold and “midnight” blue colors. One nice touch is that each model includes a braided MagSafe cable that matches the colorway.

The 2022 MacBook Air features a larger 2560×1664 13.6-inch display with smaller bezels surrounding it. Apple says it has 500 nits of peak brightness. It features a silent, fan-less design, which is impressive given the performance gains that Apple is claiming to squeeze from the M2. Apple says that it’s 40-percent faster than the previous model, but that performance boost likely varies depending on the app.

In terms of some of the small, but important specs, this MacBook Air is getting a 1080p FaceTime HD webcam, as well as new mics and speakers that support Dolby Atmos. I’m sure this webcam will be good enough for most people. But if you upgrade this model to macOS Ventura, you’ll be able to take advantage of the Continuity Camera feature that lets you use your MagSafe-ready iPhone’s camera as a webcam. Like the previous model, the new 2022 MacBook Air features Touch ID on the keyboard.

The starting MacBook Air model will ship with a 30W charger, but Apple is offering a new $59 67W power adapter that allows it to quickly charge to 80-percent in just 20 minutes. The step-up $1,499 model includes a 35W dual-port USB-C power adapter instead. Though, it’s selling this adapter separately for $59.

Not to be excluded from the news, Apple’s 13-inch MacBook Pro is getting the update to the M2, as well. So, for all of you Touch Bar lovers, you can have the best performance with, well, an interesting way to control your function row. This model will be available for $1,299.