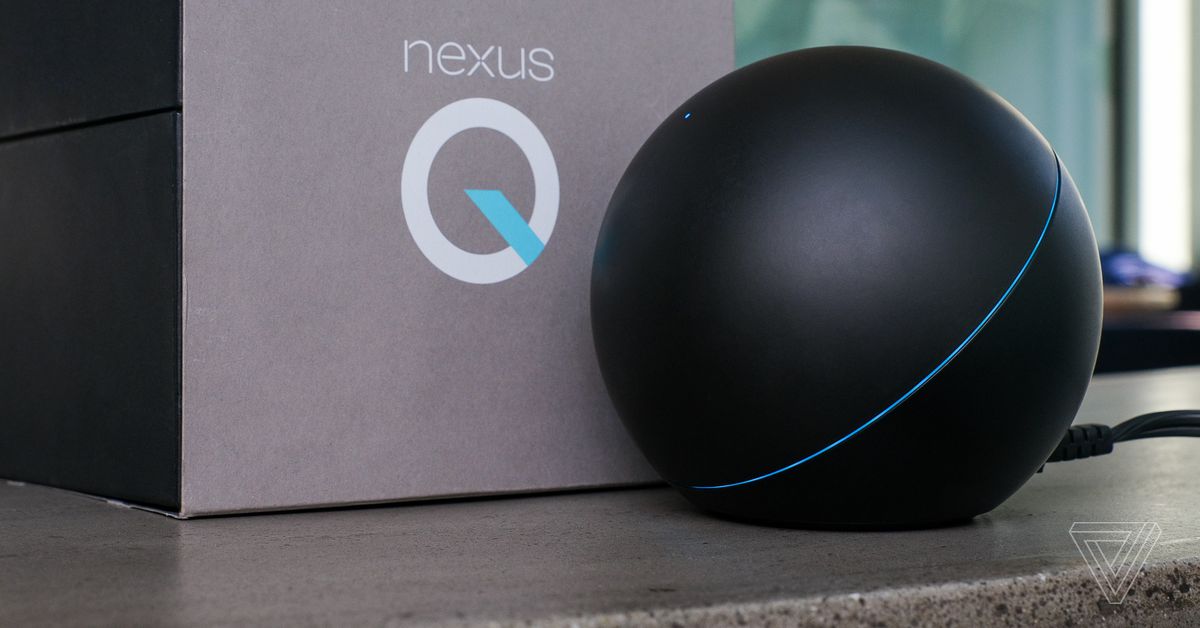 The Nexus Q was such a misguided product that Google decided to pull the plug before the device was ever released to consumers. Ten years to the day after its introduction at I/O 2012, the $299 media player positioned as a “social streaming device” remains a unique debacle in Google’s hardware story. Say what you will about Google Glass, but the company’s first foray into wearable tech at least got people talking. The Nexus Q, in contrast, was an example of what can happen when a company becomes very lost in its own walled garden.

There were promising aspects to the Q; in hindsight, you can clearly see the groundwork and early DNA of Google’s Chromecast within it. But everything about the execution was fundamentally shortsighted — and a little weird. In the below promo video that Google released on the day it announced the Nexus Q, someone describes the product as “this living alien object.”

“There’s something inside it. It wants to get out.” Totally normal stuff. Sixty seconds into the video, you’ve still got no clue what this thing is or what the hell it even does. Eventually, we learn that the Nexus Q is “a small, Android-powered computer” that can play music or videos from the cloud.

Over-the-top marketing aside, the Nexus Q wasn’t well-received. David Pogue wrote in The New York Times that it was “baffling” and “wildly overbuilt.” We gave it a 5. Reviews from CNET, Engadget, and others all shared the same consensus: for however impressive its hardware was, the Q just didn’t do enough to justify a price so much higher than a Roku or Apple TV at the time. A device that only worked with Google services just wasn’t practical or appealing for many people.

Designed by Google, made in the USA

But damn did it look cool. The Nexus Q genuinely gave off sci-fi vibes (especially when banana plugs and other A/V cables were running out of it) thanks to its orb-shaped industrial design and glowing LED ring. This was long before Amazon’s Echo came along, remember. The Q looked like something that could jack you into the matrix. And it was all original. Unlike other Nexus devices, which were collaborations with partners like LG, Samsung, Asus, Huawei, and others, the Nexus Q was conceptualized entirely by Google.

Most surprising of all is that it was designed and manufactured in the United States. Google never really highlighted or played up the US manufacturing bit — perhaps to avoid any notion that it would become a trend — but it undoubtedly contributed to the Q’s planned $299 price. (The original Moto X would later be assembled in the US, but that initiative didn’t last long.)

Inside the sphere was an “audiophile-grade” 25-watt amplifier that could power passive speakers — this remains the Q’s most unique hardware component — along with connections for optical, Micro HDMI, and ethernet. A Micro USB port was present “to encourage general hack-ability,” according to hardware director Matt Hershenson. The Nexus Q was powered by the same smartphone chip as the Galaxy Nexus. You could rotate the upper half of the sphere to control volume or tap it to mute whatever was playing. All the makings of a great living room device were there. But confining software limitations ruined that potential.

The Nexus Q only supported Google services including Play Music, Play Movies & TV, and YouTube. There was no Netflix or Hulu, and no Spotify. Google went to the trouble of putting in an amplifier, yet audiophiles had no way of getting lossless audio from the analog connectors.

The Q lacked any on-screen user interface and didn’t come with a remote; you could only control it using a dedicated Android app. Some of that will sound familiar to Chromecast owners. But there were major differences between the Nexus Q and Chromecast, which arrived a year later, that made the $35 streaming dongle such a success. Having learned a hard lesson from stubbornly favoring its own software, Google corrected course and made a heavy push for popular third-party apps to adopt casting. And crucially, the Chromecast also supported iOS.

Aside from the Nexus Q’s core functionality of playing music and videos, Google also tried to pitch the product as a social experience. Multiple people would be able to contribute to music playlists without passing someone’s phone around or jostling over control of a Bluetooth speaker. Friends could share YouTube or Play Movies content on the TV screen in a similar fashion — as long as they were on your Wi-Fi.

That all sounds fine in theory, but again, this was pre-Chromecast. The process for “social” streaming was… let’s say, inconvenient. If you actually wanted to make the “everyone at the party can DJ” scenario happen, all of your friends would also need to download and install the Nexus Q app before they could add songs to the queue. Even then, reviews complained about the software being unintuitive when it came to managing music playlists. It was too easy to accidentally play a song and blow up the collaborative mix that was in the works.

Fast forward a few years and, eventually, the top streaming music services figured out they could just solve this on their own. Now, you can make a collaborative playlist on Spotify (or YouTube Music) — no special device or random apps required.

End of the queue

Google heard the negative reviews and “that’s all it does?” criticisms of the Nexus Q loud and clear. By late July 2012, just a month after its announcement, the company announced it was postponing a consumer launch of the product “while we work on making it even better.” Early preorder customers would receive the device for free as a show of thanks for their early interest.

But the Nexus Q never made it to store shelves. By the end of 2012, Google quietly removed the product from its website. In 2013, the company’s apps started breaking compatibility with the device altogether. With so few Q units out in the world, Google didn’t waste time leaving it in the rearview mirror.

After Google abandoned the hardware, tinkerers and mod developers spent a few years trying to give the Nexus Q a new lease on life. It made it onto the CyanogenMod circuit, and one person even managed to turn it into a USB audio device to take advantage of that integrated amp. But there just aren’t many devices in circulation, so those efforts have largely faded into history.

The Nexus Q was a complete failure of a product, but Google wasn’t wrong about a “third wave of consumer electronics” that would make greater use of the cloud to keep all of your entertainment (music, movies, TV) close at hand. We’re seeing that everywhere today, and now you can add gaming to the equation. It was an embarrassing misstep, but Google’s canceled $299 media player showed that consumers have high expectations of living room entertainment devices — and not even giant tech companies can afford to go it alone.

How to run PugetBench for After Effects