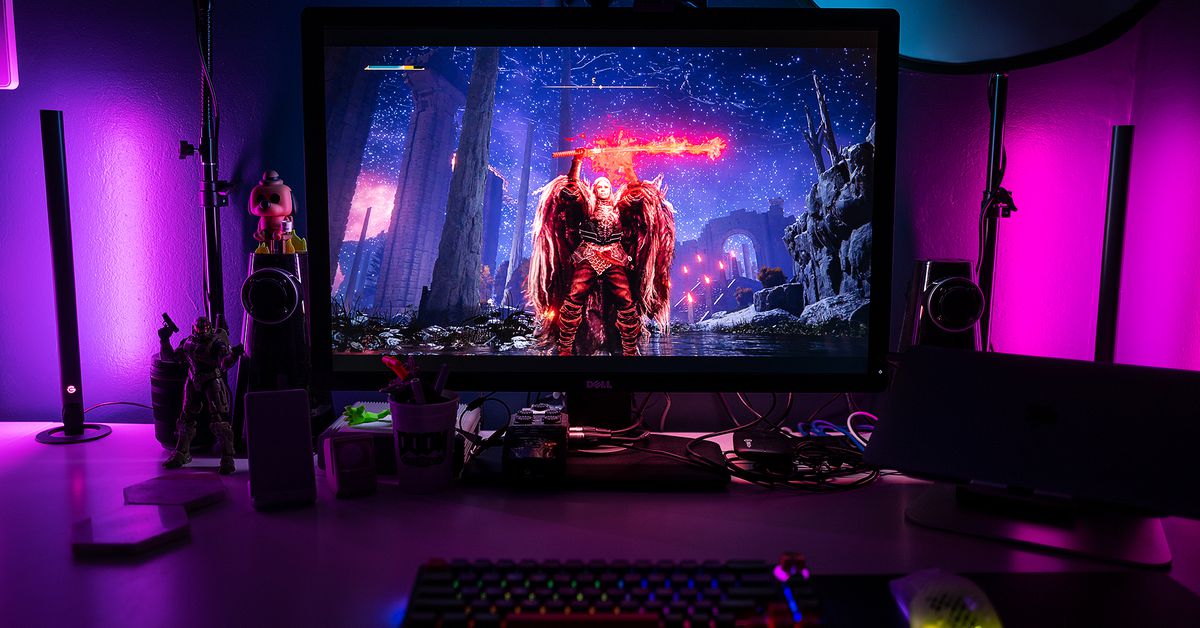 Want to add some fun colors to your gaming space? Right now, Govee is offering its first discount on its new DreamView G1 Pro gaming lights. The camera-powered, dynamic LED kit typically retails for $179.99, but Govee is selling it for $159.99 for a limited time. These lights can match the colors displayed on your monitor while gaming, which can help create a fun and immersive experience. They also come with four preset game-match modes that deliver various effects, like a racing mode that matches fast-moving colors by splitting up the light bar into smaller color segments and moving pulsing waves of colors up and down.

While these lights are also relatively easy to install, just note you’ll have to mount Govee’s camera to the top of your monitor where a webcam would typically sit. That means you may need to either move it over or, as we discovered in our review, find that the Govee camera may entirely block the webcam’s view. Read our review.

This camera-powered dynamic LED kit matches the colors displayed on the screen while you’re gaming, while offering four preset game-match modes that can deliver various effects.


The DreamView G1 Pro comes with a variety of video modes.

For a generously sized 4K TV that won’t break the bank, head on over to Amazon, where Prime members can save $260 on the 55-inch Omni Fire TV for just $299.99. If you want a larger model with support for Dolby Vision HDR, the 65-inch model costs just $499.99 instead of $829.99 at Amazon. These are new all-time low prices that Amazon is offering as a part of its early Prime Day deals, which has the retailer dropping prices on various smart TVs and other Amazon devices for Prime members. Best Buy is also matching Amazon’s current discount on the 65-inch model, selling it for $499.99.

As for their features, both the 55- or 65-inch configurations of the Omni Fire TV offer deep integration with Amazon Alexa and allow you to make hands-free voice commands even when they’re turned off. Additionally, the 4K TVs offer support for two-way video calling and Apple’s AirPlay 2 as well as low input lag for gaming. Read our review.

The 65-inch and 75-inch versions of Amazon’s new Omni Fire 4K TV offer support for Dolby Vision but are otherwise like the smaller models, with built-in microphones for Alexa commands, low input lag, and support for two-way video calling. They also provide access to Netflix, Prime Video, Disney Plus, and most major streaming services.

Shifting from TVs to earbuds, you can pick up a pair of Jabra’s Elite 85t on Woot right now for just $139.99, which is a $90 discount off the original price. It’s the best price we’ve seen on this model. These noise-canceling buds also come with a one-year warranty from Jabra along with a two-year extended warranty against dust and water, with free shipping for Amazon Prime members. Verizon, however, is also selling them for $149.99 with free two-day shipping for those who don’t subscribe to Prime.

The Elite 85t may not be Jabra’s newest set of earbuds — that distinction goes to the Elite 7 Pro, Elite 7 Active, and Elite 3 — but they still offer impressive noise cancellation and, unlike many true wireless earbuds, can pair with two devices at the same time. Other useful features include an IPX4 rating for water and sweat resistance, good on-earbud controls, and a case you can charge wirelessly or with USB-C if you prefer.

However, be aware you can only use the right earbud by itself and that the IPX4 rating is actually a slight downgrade from the IP55 of their predecessor, the Elite 75t, and the IP57 protection in the Elite Active 75t. Nonetheless, if you’re looking for a pair of workout buds that can withstand a ton of sweating, the Elite 85t might not be for you. Read our review.

Jabra’s Elite 85t have noise cancellation and a semi-open design, letting them breathe a bit more than the company’s other models. One of their most impressive features is the ability to handle multiple Bluetooth connections simultaneously.

Even more ways to save

Welcome to our new Wednesday edition of The Vergecast