Home > Tech > How to frame your NFT 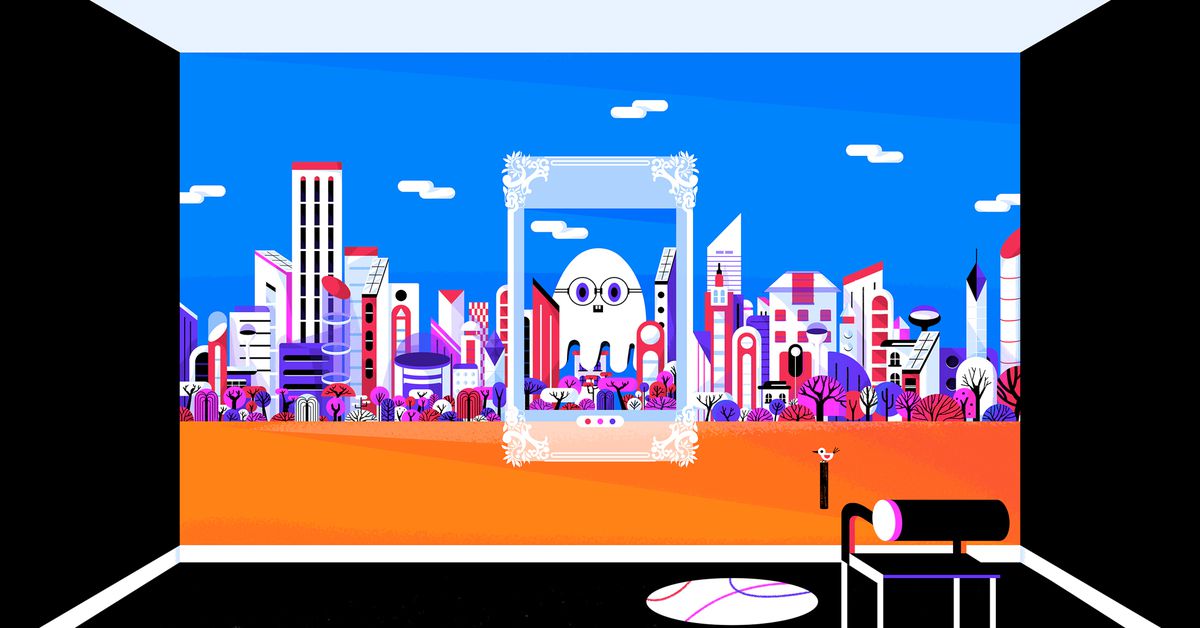 How to frame your NFT

So let’s say you bought an NFT. Not because you want to make a bunch of money and you’re just going to flip it — we’ll call those people the JPEG flippers — and not because someone sold you on a big idea about “community” and you didn’t buy an NFT so much as a link to a Discord — those are the yacht clubbers — but you bought it because you just liked the way the thing looked. Maybe you’re a collector, maybe this is the first valuable piece you’ve ever acquired. Either way, you bought it not to sell it or use it. You bought it to look at it. You want to hang it up in your home!

On one hand, you have plenty of ways to get your digital art on display. It’s just a picture, after all. (You could even — gasp — just print the thing and hang it on your wall.) Virtually any screen you have will display it fine, and it’s always right there on your phone anyway. But your 50-inch LCD panel won’t do justice to the piece, though, not really.

As NFT art gets more valuable, and as artists begin to care more about how their digital art is displayed in the real world, the question of how to display your digital collection has become a more complicated one. Galleries that want to promote digital art are having to rethink not just the devices they use but also the way they light their gallery and how people move through it. Artists, used to their work always keeping the shape in which it was created, now have to think about both digital and physical versions of their creations. Art collectors are often faced with an entirely new set of decisions about how to display their pieces. And you thought NFTs were complicated.

Scott Gralnick has been thinking about NFT displays for a while. He’s now the co-founder of Lago, a company building a $9,000 NFT frame designed for high-end collectors, but he’s been in crypto and Web3 for nearly a decade. When he talked to his fellow crypto whales, Gralnick says, the same thing kept coming up. “I have a multimillion-dollar collection,” they’d say, “and I had to retrofit it to a TV. I don’t want to show it on my computer, I don’t want to show people my phone, how can I get this into my home?”

Gralnick and his co-founders set out to build something for those folks, but also something that might entice traditional art buyers – who might not grok the idea of phone-bound art at all — to get into the NFT space. “I had friends who were doing dinners with Christie’s and Phillips and Sotheby’s, and they get NFTs, they get minted works of art,” Gralnick said. “But it came down to one question every time: how do I enjoy this at home?”

Gralnick now calls the Lago frame a tool for “mass consumption” of NFTs, which is quite a thing to say about a $9,000 frame. The team wanted to make absolutely sure you couldn’t confuse the frame for a TV, so they selected a 33-inch, square, 1920 x 1920 display. An optional camera sits below the frame, just above an optional soundbar, both of which artists can use to augment their pieces. “Maybe they build something unlockable,” Gralnick said by way of explanation. “If I do the right gesture sequence, it unlocks it. Or maybe I turn around and actively throw it to the other frame.” You can use the Lago frame to display one NFT, or use the companion mobile app to cycle through your whole collection. Or, if you’re so inclined, present a rotating set of pieces curated by NFT influencers. (Gralnick says these come with clear indications about which pieces you do and don’t own, though, so no pretending that ape is yours.) In that sense, the frame can be both a display and a distribution channel — an NFT museum in your own home.

Is a frame just a TV? Or is it a completely new digital experience? And who decides, anyway?

Astronomical price and all, Lago sold its entire stock in pre-orders. That’s not surprising: the dedicated NFT screen is a booming industry. Tokenframe’s displays run from 10 to 55 inches, and cost up to $2,777. Netgear has actually pivoted its digital photo frame business into an NFT one — and its Meural screens run up to $599.95. Canvia pulled off a similar pivot. Blockframe and Danvas and others all make similar promises about their luxury digital art displays, though most startups are still firmly in the hype and pre-order phase. For the DIY crowd, you can use a Raspberry Pi and the TokenCast protocol to build your own NFT screen on the cheap.

Because all you technically need to get in the business is a LCD display — and not even a particularly high-end one — startups in the space have come and gone quickly. Qonos, for instance, launched in 2021 and said it sold out its first run of frames that could access the owner’s own collection plus a whole gallery of Qonos-curated artwork. Now there’s practically no sign left of Qonos other than a private Squarespace website. (Qonos founder Moe Levin didn’t respond to a request for comment.)

Joe Saavedra, the founder of Infinite Objects, thinks all of this is a bit much. A lot of companies, he says, “are really making televisions that do a lot less than a television. And in the end it’s a gallery, a slideshow of your NFTs, so it doesn’t matter if this NFT you paid $10,000 for and this one was an Airdrop, they’re all right next to each other. And you’re just swiping through.” When he set out to build an NFT frame, he wanted to build the least interactive, least gadget-y thing he could make.

Infinite Objects got its start by “printing video,” which in practice means embedding a display inside a simple frame, setting a single video to run on a loop forever inside that frame, and shipping it to you. “When you take it out of the box, it turns on in your hand,” Saveedra says. “It doesn’t have any buttons or switches, there’s no interface whatsoever.” The result is much closer to a painting straight out of Harry Potter — a moving piece inside an immovable object that hangs on the wall or sits on your shelf.

Saveedra is now doing the same thing with NFTs. Infinite Objects worked with Mike Winkelmann, who you might know as Beeple, to make and ship physical versions of every NFT Winkelmann sells. It also works with Dapper Labs, and is the official frame of NBA Top Shots. Getting your NFT printed starts at about $120. You can buy frames from 6.4 to 11.4 inches tall, the displays surrounded by either bamboo or acrylic. The displays themselves aren’t particularly impressive — 1024 x 576 on the largest model, lower-res than the original iPad in 2011 — but Saveedra seems to think the very existence of a durable physical object is the most important thing. “If it’s on a TV, I can just flip it, right?” he says. “All right, cool, next.”

Steve Sacks, the founder of bitforms gallery, which has been presenting digital art for two decades, also falls firmly on the “don’t just put it on a TV” side of the equation. “You don’t want to be flipping to the NBA playoffs, and then turn on your $100,000 piece of art,” he says. “That takes away from so many things.”

Some artists, Sacks said, care deeply about the screen their artwork ultimately ends up on. They’ll dictate a specific resolution and aspect ratio, even the size at which their piece should be displayed. Others will go so far as to actually create the object on which their work should be displayed. In that case, Sacks says, “The artist is providing us a sculpture. The art is not only the content; it’s the object that comes with it.” But many of the things bitforms shows and sells are what he calls “unframed works,” in which the file gets sold and the buyer can display it however they’d like.

At the Quantus Gallery in London, things work a bit differently. Josh Sandhu, a co-founder of Quantus, says that when the team was getting set up for its first NFT exhibition, they tested six or seven different TVs. Now 36 Samsung Frame sets line the walls, some vertical and some horizontal. “The matte look, it is quite similar to an actual print,” Sandhu said. “They’re pretty quality.” Quantus wants to experiment with other display ideas — Sandhu wants to build a wall of retro TVs, run a VR exhibition, and figure out holograms — but for now TVs do the trick.

This is the thing about NFT art and how we display it. It’s ultimately not a question of graphical fidelity or pixel density, but one of purpose. Do you buy an NFT so you can look at the JPEG all the time? Or is an NFT about your relationship with the artist, with other collectors, even with the underlying technology? And maybe just as important, who gets to decide? With physical art, most of these decisions are made when the art is made, and as it changes hands it becomes impossible to track and control. With NFTs and the blockchain, the tracking is the point; artists can know exactly who owns their work, and collectors can know exactly who created it. So whose art is it, really?

Nobody I spoke to claimed to know the answer. And nearly every one of them said that’s part of the fun. NFTs have one definite use. They’re an act of provenance, a claim of ownership and authenticity that was never possible before. Artists are coming to appreciate the technology for that. (And for the ludicrous sums of money they make minting NFTs.) Now, as prices and enthusiasm drop and the JPEG flippers and yacht clubbers fade out of the scene, the art crowd is beginning to figure out how the digital and physical art worlds interact. And exactly what resolution that requires.

How to use a TikTok video template

Mark Zuckerberg has so many VR headset prototypes to show us

This wired Xbox controller has Bluetooth for use with phones

The year of 1 trillion streams