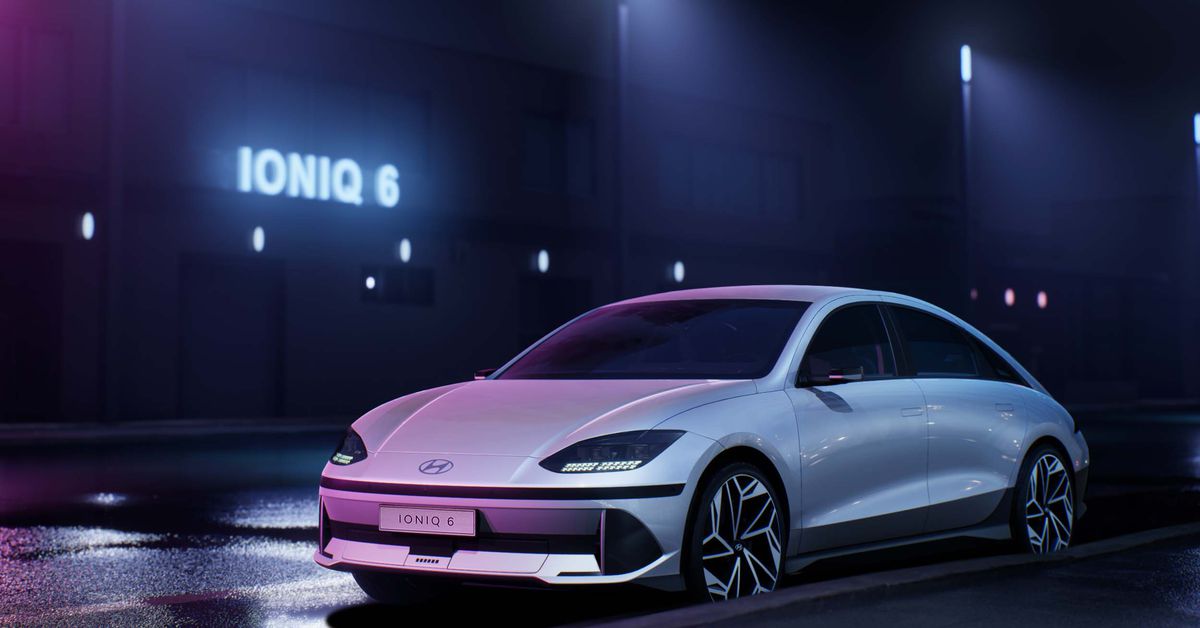 Hyundai is offering an early look at its upcoming all-electric sedan, the Ioniq 6. It comes as Bloomberg reports that the company’s EV market share is quietly surging in Europe and the US, causing even Tesla’s Elon Musk to take notice.

If last year’s all-electric Ioniq 5 crossover SUV took inspiration from 70s designs, then Top Gear says that the 6 draws inspiration from streamlined vehicles from the 20s and 30s like the Stout Scarab. If you liked the look of Hyundai’s Prophecy concept car from 2020, then the Ioniq 6 is the vehicle it’s morphed into.

The South Korean automaker is focused on showing off the design of the Ioniq 6 rather than its technical specifications for now, so there are no firm details on its battery size or range. But the car is using the same Electric Global Modular Platform (E-GMP) as the Ioniq 5, which was rated for up to 315-miles on a single charge. Range should benefit from the Ioniq 6’s streamlined design, which results in one of the lowest drag coefficients on the market at just 0.21.

Internally the Ioniq 6 has a couple of different touchscreens: a 12-inch infotainment display and a 12-inch digital cluster. But when it comes to the kinds of controls you’ll regularly need while driving like audio or climate control, Hyundai has opted for physical buttons. “The touchscreen is great when this car is [in] stationary condition, but when you’re moving, touchscreens can be dangerous,” Hyundai design chief Sangyup Lee tells Ars Technica. “For us, anything that relates to the safety, we use hardware. Anything not related to safety will use a touch interface.”

Other interior features include lights on the steering wheel that show when the car is charging or listening for voice commands, the ability to light up the cabin with a choice of 64 colors, a completely flat floor, and a stretched interior for “optimized legroom.” There’s also the option of having camera door mirrors rather than regular wing mirrors in markets where they’re legal, which Ars notes doesn’t currently include the US.

There are no firm details on how much the Ioniq 6 will cost, but Ars Technica reports that it’s expected to be cheaper than the Ioniq 5, which starts at $46,650. It’s expected to go into production next month, and should go on sale in the US in model year 2023 . It’ll receive its full public launch on July 14th, when we’ll hopefully get firmer details on its release date. For a hint at what might follow, check out the Hyundai Seven, a hulking concept SUV the company showed off last year.

500 drones will create a giant Candy Crush ad above NYC