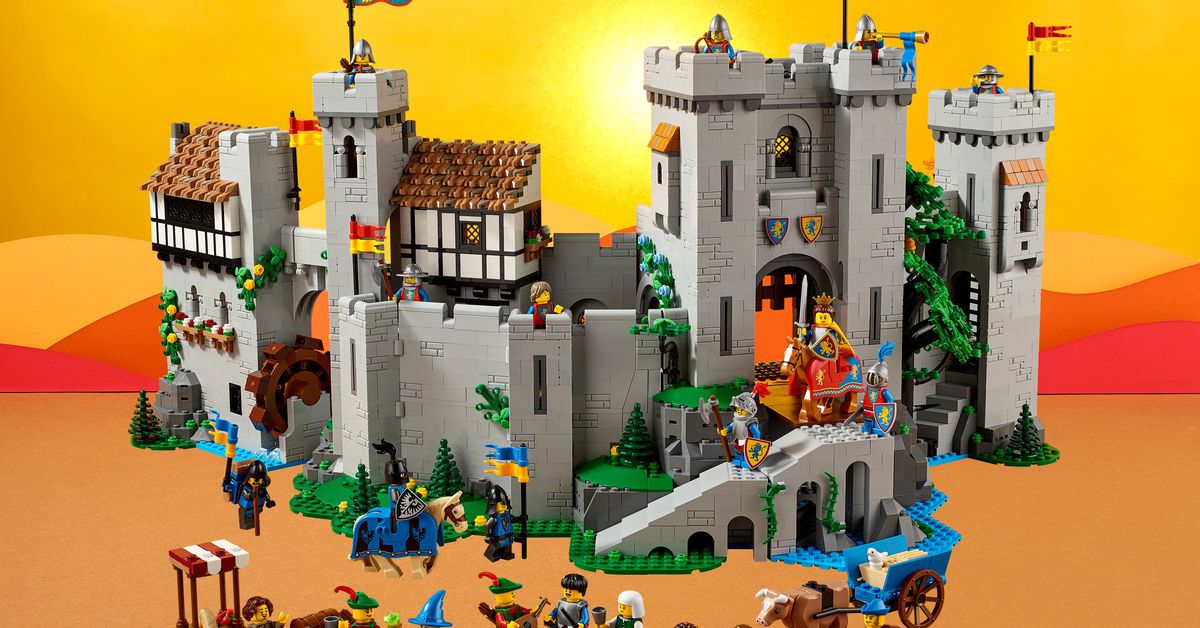 Last January, Lego promised its 90th anniversary would be one to remember: the company agreed to revive one of its classic Lego themes (like Space, Castle, and Pirates) with a new, adult-grade Lego set.

But it turns out we’re not just getting one nostalgia bomb today — the company has decided to bring back classic Space and classic Castle at the same time. First, Lego is revealing the Galaxy Explorer, an upsized version of the original iconic Lego spaceship that will go up for pre-order today. And second, it’s announcing the Lion Knights’ Castle, which — at $400 and 4,514 pieces — is easily the most intricate and impressive castle playset the company’s ever produced.

For days now, I’ve been pouring over the high-resolution photos of each set you’ll find below, marveling over the details and hidden play features. But I didn’t have to do it by myself: I also got to speak to their lead designers Mike Psiaki (also see: Titanic, Saturn V, Aston Martin DB5) and Milan Madge (Space Shuttle Discovery, Pirates of Barracuda Bay, Central Perk). I even got to speak to Niels Milan Pedersen, a 44-year veteran who co-created Lego Pirates and Forestmen, worked on many classic Space themes, and designed many of the most iconic forts, castles, and ships including the Black Knight’s Castle, the Royal Knight’s Castle I was lucky enough to own as a kid, and the legendary Black Seas Barracuda.

And I’ll be damned if the new castle doesn’t outdo them all.

Trapdoors and secret passages. Raise-and-lower drawbridge and portcullis, now with hidden chains and counterweights built right into the set, instead of the exposed strings I had as a kid. The most fortified-looking towers from a Lego castle yet, complete with arrow slits. A waterwheel geared to a grindstone so the baker can grind flour for his bread. A royal bedchamber and an armory bristling with weaponry and a dungeon and a tiny banquet hall and enough ladders and staircases to actually connect most of the levels. Lion Knights and Black Knights and Forestmen and mini-stables and an ox-and-cart and an outdoor food stand.

“We really wanted to evoke the feeling you got when you opened the catalog as a kid and you saw this enormous landscape with the market village and the peasants,” says Madge. As a result, the set has 20 minifigures, more than all but the biggest Star Wars, Marvel, and sports sets.

Oh, and did I mention a lady with a crown is ruling the whole thing and many of these minifigs are women?!

But perhaps the most incredible part to me is how the whole set transforms. I wish I had a video to show you, because it took a sec to wrap my mind around it with still images alone — from the outside, it looks like an enclosed castle even when the set is swung open, and doubly so when it’s closed. As a thought exercise, take a look at the waterwheel in the pictures above. Does the river flow next to the castle, or does the river run through it? The answer is both.

Designer Milan Madge says the enclosed/open design was the goal from the start. His team’s primary influences were the original yellow Lego castle from 1978, which similarly swung open on hinges, and the 6086 Black Knight’s Castle with its asymmetrical, castle-on-a-hill design. “We want this to be something you can play 360 degrees around it, we wanted to make it fully enclosed so you had walls on every single side.”

But Madge and Psiaki also shared a love of 6066 Camouflaged Outpost, the Forestmen’s hideout, and decided to hide the merry men and women inside the new castle too. And when I say “inside,” I mean it literally:

“If you’re on the drawbridge at the wrong time, you get thrown into the dungeon, but the forest men have a sneaky little system of caves to break you out — there’s a hidden network underneath the castle which you can only find by kind of taking the model apart,” explains Madge.

“We figured out there’s only one spot in the whole model that isn’t occupied by some sort of story,” he adds. “Yeah, there’s very little empty space underneath, everything is being used for something,” chimes in Psiaki.

Speaking to Niels Milan Petersen, who designed many of the sets that inspired the new castle (including the Black Knight’s Castle and Camouflaged Outpost), I get the sense the longest-tenured Lego designer is quite proud — but maybe also a teensy bit jealous of what his fellows can do on a budget designed for adult fans of Lego?

“We would always put so much into them that we had to take out again,” says Pedersen. “The price points weren’t so high because people didn’t spend so much on toys in those days and that was always the concern for us.”

“It was much more thought to be just for kids because in those days, you know, grownups wouldn’t admit if they played with Lego, that’s quite a new thing.”

He remembers how one of his original castle models had a blacksmith and a little kitchen before he had to remove them. Another had staircases leading up to the towers that were deemed too complicated and expensive — and he thought kids would surely care! “No, they didn’t, but they noticed there was a chimney on one of the buildings and there was no fireplace connected to the chimney. That was what they actually noticed! Kids are sometimes funny that way — the figures could just fly up to the towers.”

The other things he had to forgo in those days were catapults and trebuchets “because they were considered weapons,” but Lego designers slowly won the battle there. By 1989, he and the late Jens Nygaard Knudsen, creator of the Lego minifigure and Lego Space, had convinced the higher-ups to allow not only a pirate captain with his own distinct face (instead of the smiley), but projectile shooting cannons (though not in the USA), pistols and muskets, and a skull and bones pirate flag. All of those were battles with then-owner Godtfred Kirk Christiansen, he says.

“The Jolly Roger… he really didn’t want me to put a skull on that, that was the limit, he didn’t want to see that.” They tried countless versions without, but it didn’t look right. “So Jens and I went over one evening to his private home, we went in for a cup of coffee and we talked a long, long time. Finally, he gave in and said yeah, okay, make your skull on that flag but you have to make it smile somehow.”

And they did. In 1995, they let him leave a trebuchet in, too: my childhood Royal Knight’s Castle, designed by Petersen, has a tiny rock flinger on the battlements you can flick with one finger.

These days, the former fisherman mostly sculpts new parts for Lego for other designers’ sets. He’s designed minifigures like the original skeleton and more recently Muppet Show figures like Kermit the Frog, as well as multipurpose elements like the feathers in the Forestmen’s hats and knight helmets — which he says were originally conceived as quills for minifigs to hold, too. “In the old days, when you were going to make an element, it was demanded you should foresee that element could be used for at least 10 years.”

The new Lion Knight’s Castle goes on sale August 3rd for Lego VIPs (it’s a free signup) and August 8th for everyone else. Which, strangely, means you probably won’t get the new Forest Hideout set (a remake of Petersen’s Forestmen’s Hideout) for free with your purchase since it’s available through June 22nd. For now, here’s one last image of the new castle.

Lego’s original spaceship, the Galaxy Explorer, is back and better than ever

Remedy confirms Control 2 is in the works

Amazon finally found a way inside of your home with iRobot