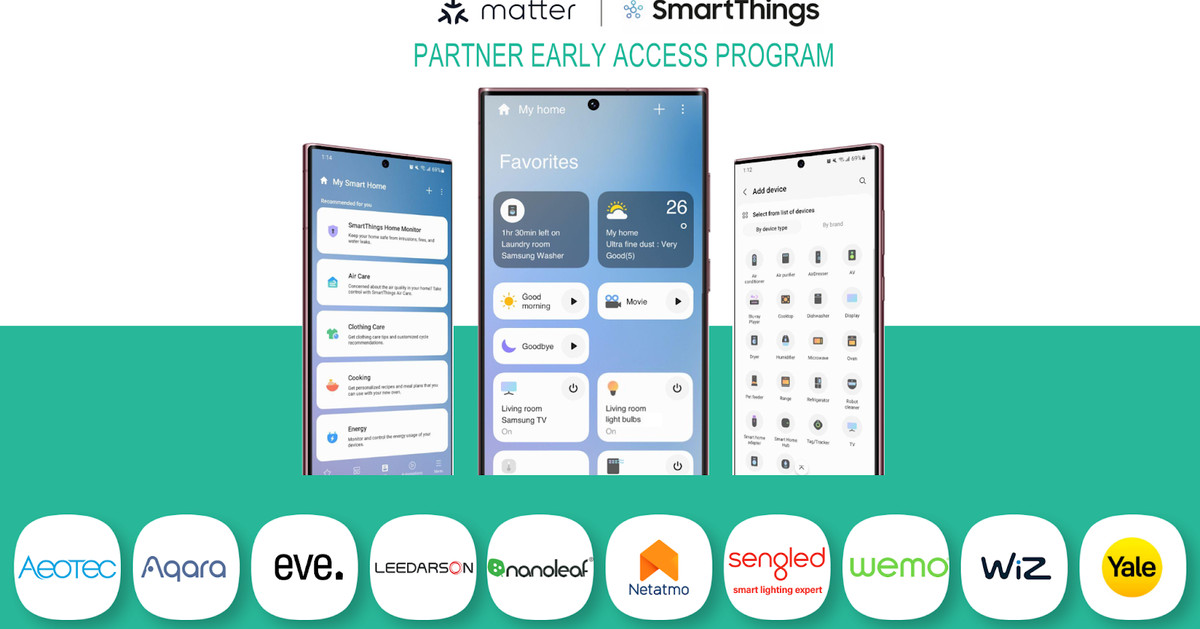 Matter is picking up steam. Samsung has announced a Partner Early Access Program for its SmartThings smart home platform, allowing companies such as Eve Systems and Aqara to start testing their Matter-compatible devices.

What’s notable here is this means there are Matter smart home devices, such as lights, locks, and sensors, out there being tested. While the Connectivity Standards Alliance (CSA) — the organization behind Matter — has already said there are devices going through its testing, it hasn’t revealed what and by whom.

Samsung SmartThings announced it’s working with Aeotec, Aqara, Eve Systems, Leedarson, Nanoleaf, Netatmo, Sengled, Wemo, WiZ, and Yale. Between them, these companies make lightbulbs, light switches, contact and motion sensors, and door locks, so we now have a clearer idea of which devices will be ready to go on day one when Matter launches this fall.

Matter is the new smart home standard that promises to make connected devices more interoperable, flexible, and private. Along with Apple, Google, and Amazon, Samsung is a founding member of the standard. A key element of Matter is Multi-Admin control, a feature that will allow every Matter device to connect to and be controlled by one or more smart home platforms — i.e., SmartThings, Amazon’s Alexa, Apple’s HomeKit, and Google Home. So, it’s important that manufacturers know their devices do work with all those platforms when Matter launches.

Samsung says this new testing program allows manufacturers the opportunity to test their devices and Matter interoperability with Samsung’s SmartThings hub-enabled devices and through the SmartThings app. This includes Samsung’s Galaxy devices and new Samsung TVs and Samsung Family Hub refrigerators. Samsung has previously announced that these devices will have SmartThings hub functionality built-in and will get updates to become Matter controllers when the standard launches.

Samsung’s new program is a complement to — not a replacement of — the official Matter certification through the CSA, which is the only testing devices have to go through in order to use the Matter logo and prove to be interoperable with other Matter devices.

However, Samsung’s move seems partly geared toward maintaining momentum since Matter has been delayed. (It was originally scheduled to launch next month.) “While the launch of Matter later this year remains a significant milestone for SmartThings and the Connectivity Standards Alliance, the Partner Early Access Program has created tremendous near-term excitement for SmartThings and select companies,” said Samantha Fein of Samsung SmartThings. She also told The Verge that the program will be rolling out to more partners soon.

While many of the “select companies” in the early-access program are already able to connect to SmartThings, neither Eve nor Aqara previously had official compatibility with the platform. This is another indication that Matter is on track to deliver what it promised: a smart home where the question of whether your new lightbulb works with Alexa, HomeKit, or SmartThings is one you need never ask again.

Napster joins Limewire and Winamp by jumping on the web3 bandwagon

Time’s up: the leap second is being scrapped in 2035

Vizio’s new TVs and soundbars focus on what the company does best: value

Microsoft is working on games for Microsoft Teams

San Diego Comic-Con 2022: all the best panels, trailers, and news to watch out for