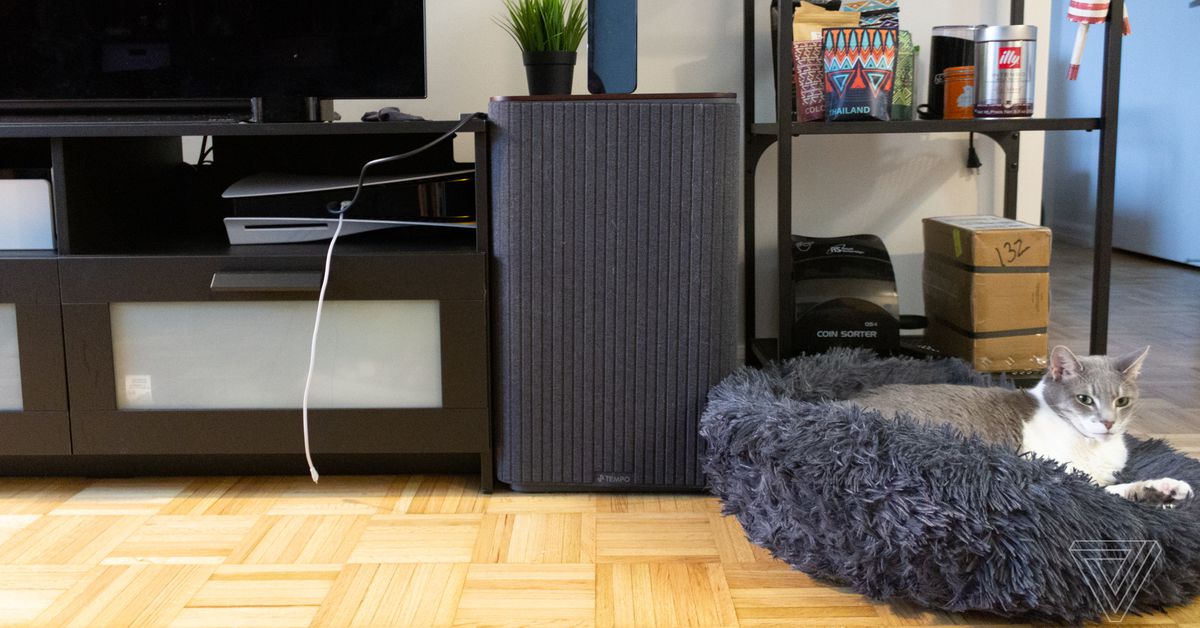 When I first got a sneak peek of the Tempo Move last year, I was stoked. Here was a $495 smart gym that would not only fit into my tiny apartment but also wouldn’t look out of place. It used the iPhone’s TrueDepth camera tech to track your movements, the classes were great, and the design was so clever I was gobsmacked. And, if it weren’t for annoying connectivity issues, the Tempo Move might’ve been my favorite connected fitness gadget that I’ve tested in the past year.

When it comes to at-home gyms, most players in this space struggle with price and size. The most recognizable gadgets — like the Peloton Bike Plus or Tonal — will set you back thousands of dollars and they’re impossible to disguise in your home. That’s not the case with the Tempo Move. It looks like an end table straight out of West Elm, or if you have the black version like I tested, a sleek subwoofer. I usually have to rearrange my furniture to fit larger fitness gadgets in my New York City apartment, but this time, I didn’t have to at all. Plus, it took my husband several months to notice the Move was even there.

The design is stylish, but it’s incredibly functional, too. The top lifts away so you can store the Tempo Move’s smart dumbbells. And while you can place the Core — the piece where you dock your iPhone — on top of the Move, it also comes with a puck to cover up the hole if you want to place the Core elsewhere (or take it on the go). If you open up the front fabric cover, you’ll find a storage rack for the various weight plates that come with the Move. The organizational nerd in me is chuffed that all the accessories are so easy to hide. Design-wise, the only “downside” is that my cat thinks the fabric cover is his personal scratching post.

Tempo’s smart adjustable dumbbells are also impressive. The brightly colored weight plates are cute, well constructed, and secure. You get 50 pounds of weights included with the Move, and you can buy additional plates if needed. The “smart” part of these dumbbells is also neat. They’re outfitted with a sensor attachment that can detect how much weight you’re using based on the color of the plates. That’s then communicated to the Core so that, when you take classes, you’ll be able to see how much you’re lifting on screen as well as automatically record it in the app. Tempo provides weight recommendations in its classes, and it can actually tell in real time when you’ve added or removed weight. Lastly, the dumbbell actually “spins” when you lift, which is meant to help reduce torque and wrist strain.

Classes make or break connected fitness platforms. On that front, Tempo’s app makes it easy to search for classes and stay on track. There’s over a thousand classes across a wide variety of activities, like strength training, boxing, yoga, core, prenatal workouts, and yoga. As a runner, I appreciated that there was a collection of strength training workouts geared toward the sport. There are also options for people who play golf or tennis. Another thing I appreciated is that you can find classes based on goals like gaining strength, improving range of motion, and mastering the basics. Most fitness apps tend to lump classes together based on muscle group and time (which Tempo also does). That’s fine, but that approach can also be limiting for beginners who want to build strength for a specific purpose.

The only potential con is that the Tempo instructors are much more matter-of-fact. Sure, they sprinkle in jokes and motivational cues, but nowhere near the degree you get in Peloton. They’re also not going to give you gentle reassurances like in Apple’s Fitness Plus. That may be disappointing if you rely on peppy instructors to get you through the workout. For me, I didn’t mind so much and appreciated the change of pace.

One thing that sets the Move apart from competitors like the Peloton Guide is form feedback. It’s not perfect, but the device gives meaningful tips based on your movements. For instance, when I leaned too far back during a deadlift, I saw that pop up on the screen. If you’re having too easy a time, you might also get a tip to go up in weight. Given how important form is to avoiding injury, I wish more strength training systems would do the same.

The Move will also automatically count your reps, but it occasionally drops the ball. That may have been because my exercise space was a tad cramped and the Move requires roughly six feet of distance for best results. Another gripe I had was music. With Tempo, you select a music station, so the workouts themselves aren’t set to a specific playlist. This won’t bother everyone, but music is a huge motivator for me. Nothing helps me push through a tough circuit like a well-timed bass drop. If you’re like me, that’s something to consider — especially when so many other services do make music a central part of the experience.

While we’re on the subject of gripes, the Tempo Move currently only works with the iPhone. You also need to have a relatively newer iPhone — the XS / XR or later — running iOS 14 at the very least. Android users are out of luck. When I spoke with Tempo CEO and co-founder Moawia Eldeeb at a demo, he noted part of the reason is not every Android phone has lidar or camera tech similar to Apple’s TrueDepth tech. Eldeeb didn’t rule out Android support down the line, but there’s no telling if or when that’ll happen.

Those are all minor problems I can overlook. My major issues with the Move were that it takes up an HDMI port and connectivity. The HDMI port isn’t a huge problem if you’re light on gadgets. However, I live in a tech maximalist house replete with soundbars, streaming boxes, and multiple gaming consoles. That meant I had to buy an HDMI splitter to use the Move without disrupting my husband’s precious TV setup. (Even then, I still had to put up with him complaining every time I forgot to switch back to the PS5 after a workout.) If you too live in a gadget-filled house with a precise setup that’s a pain to tweak, you’ve got to be willing to dive into the jumble of cords to make any necessary adjustments.

As for connectivity, the Tempo Move was unreliable for me. I’ll cop that this may be a result of my complicated TV setup or my iPhone. But, in my testing, there were several times when I went to exercise and couldn’t get the Move to play a class. Or, if I did get a class going, it would randomly crash or buffer to the point where I lost momentum. I also got error messages saying the Core couldn’t connect to the Tempo server.

When I reached out to Tempo to troubleshoot, I was given a long list of steps, but the only thing that really helped was power cycling. Basically, I had to completely unplug the Core from the TV and power source, wait 30 seconds, and then plug everything back in. (That’s why my hunch is the whole HDMI splitter situation might’ve exacerbated the problem.) That almost always helped, but it’s a hassle when you’re trying to cram in a quick workout. It also wasn’t a permanent fix. I had to do it over and over again — sometimes two or three times on the same day. It wasn’t an internet problem either. We have gigabit internet and a beefy, beefy router. Plus, I’ve never had this issue with similar devices.

The only other thing I can think of is my iPhone 12 Pro Max might not have been connecting with the Core properly. I noticed that my class would cut out whenever my phone moved slightly. For whatever reason, my iPhone never seemed particularly secure when plugged in. I tried connecting both with and without my phone case, but it didn’t seem to make a difference.

These connectivity woes didn’t always happen, either. Over the past few months of testing, some weeks I had zero problems, while other weeks devolved into a troubleshooting bonanza. The anxiety of not being able to predict how a training session would go ultimately led me to prefer other options. I loved the Tempo Move when it worked. I just never knew when it would work.

If you’re paying Tempo’s $39 monthly subscription, you should get a gadget that works reliably

I can’t say whether this will impact everyone who gets a Tempo Move. I have reviewer friends who didn’t have this problem at all. Then again, I have seen several users report connectivity issues in subreddits. For what it’s worth, Tempo’s support staff have always been responsive to me, and other customers have reported finding reliable fixes. Technically, I also have a decent fix in power cycling. But, if you’re paying Tempo’s $39 monthly subscription, you should get a gadget that works reliably without all the troubleshooting.

I’m on board with the vast majority of what the Tempo Move is offering. If this connectivity problem didn’t exist, I’d have to scrape the barrel to find things to complain about. That’s how strong the design, classes, and overall concept behind the Move are. But this problem does exist, and I can’t overlook it. I so wanted to love the Move, but until Tempo figures out a fix, this is another gadget where the concept ended up being better than the execution.

Photography by Victoria Song / The Verge

The new Google Wallet is now available to all users

Game of Thrones in 4K is coming to HBO Max

Vergecast: the wild laptops from Computex 2022