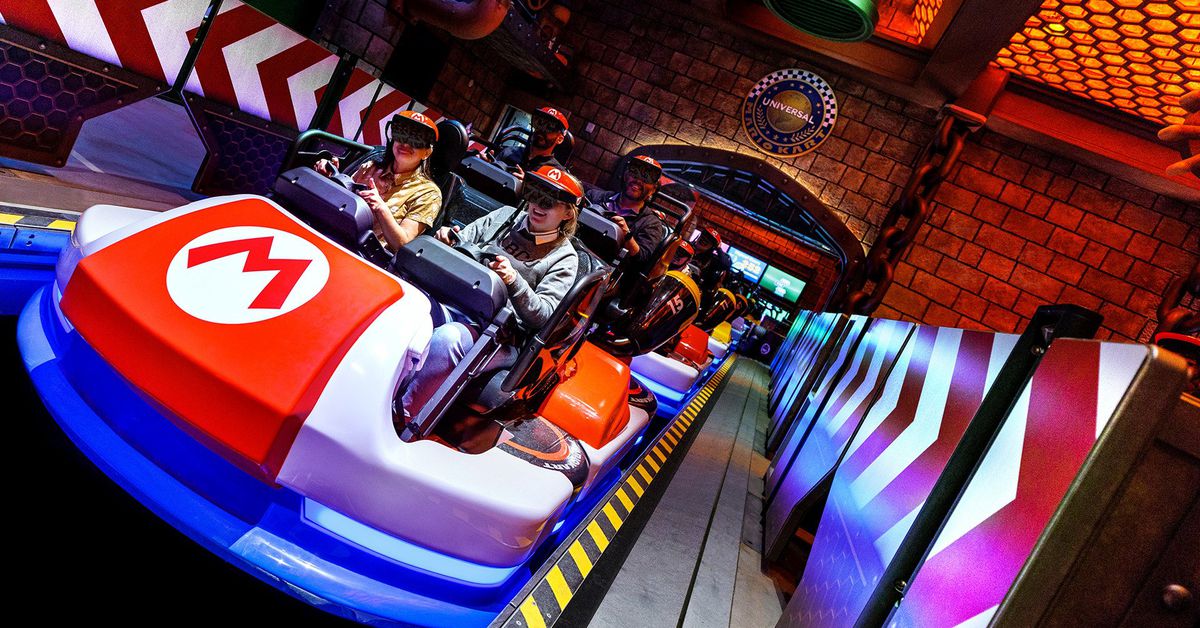 Universal Studios Hollywood and Nintendo are slowly cranking up the volume about the first Super Nintendo World theme park located in the US. Now, they’re narrowing its opening window to “early” 2023 while posting a few pictures and a video trailer of its signature ride: Mario Kart: Bowser’s Challenge.

The augmented reality on rails ride is already a highlight of the experience at Super Nintendo World in Japan, which we visited early last year, offering an interactive experience where riders in four-seat Mario Kart vehicles can steer to collect coins and also throw shells to defeat Team Bowser, which also allows for different outcomes to the ride.

Riders wear plastic Mario hats with HoloLens-like wired visors on the front, which combine with the movement of the ride, projection mapping on the walls, and actual physical set pieces to deliver action that makes it feel like the karts are going faster than they really are. Sam Byford described the experience as “overwhelming but a whole lot of fun,” which encouraged riding it multiple times to get a higher score. It’s possible that this ride will improve upon the initial effort, which engineers described as upgradeable and modular, to account for improving technology. But, from the description and trailer, it sounds about the same.

At the Japan park, there was only one other ride when we visited, Yoshi’s Adventure train ride, although it did include other interactive areas and the Power Up band that pairs with visitors’ phones to track their progress. Another area built around Donkey Kong is reportedly under construction. As for the US theme park, the only details we have so far are that it will have “the groundbreaking ride, Mario Kart: Bowser’s Challenge, and interactive areas, to be enjoyed by the whole family, along with themed shopping and dining to enhance the entire experience.”