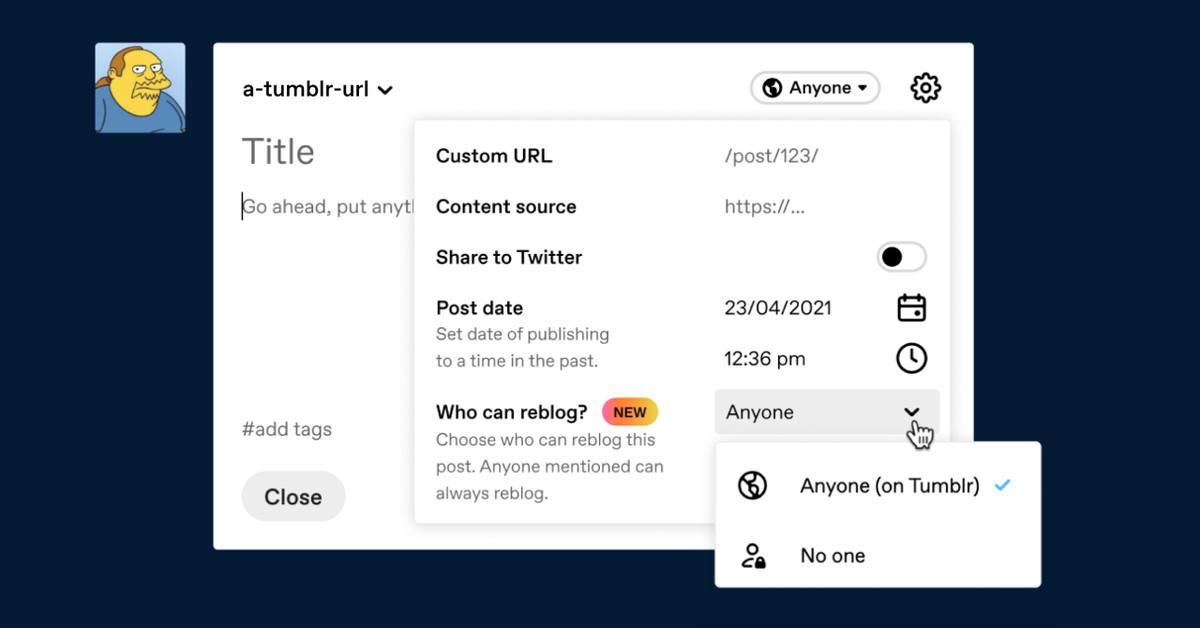 Tumblr is adding a feature to disable reblogs of posts

Tumblr users who don’t want a specific post to be reblogged by others will now have the option to turn off the reblog setting. In a blog post, Tumblr says it will start rolling out reblog controls today on web and iOS, with Android to come soon.

When composing a post, users can choose between two reblog options. One option allows anyone on the platform to reblog the post to their own blog. A new option will let users disable reblogs on that post, making it so nobody can reblog it.

In the post, Tumblr says that the feature comes at the request of users who say controlling reblog settings would create a sense of safety. Even if a user blocks someone else after the post is made, the blocked user still would not be able to reblog the post, the company says.

“This change gives you control over your own posts, and so will improve your posting experience,” the blog post reads. “Ultimately, better posting means a better Tumblr.”

Users could find ways to get around posts that have reblogs turned off — like taking screenshots or reposting content. But the new feature does give users more control over how their content spreads and who can engage with it.

Other platforms like Twitter and Facebook have rolled out new settings aimed at giving users more control over their posts. In April, Twitter began experimenting with an “unmentioning” feature, allowing users to remove themselves from conversations where they’re tagged. Last week, Meta tweaked settings on Facebook, slightly changing the default setting for who can view a post.

Sony is investing even more into esports

The Verge’s Guide to Black Friday 2022

Blizzard will bring back BlizzCon in 2023